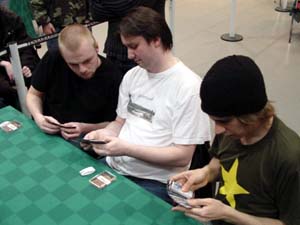 is it, the final draft of the tournament. Dutch team Schietkoe kept their early lead from yesterday and after overcoming French team NPC All Stars in the Semi's find themselves with a tough final against the highly experienced Scandinavian team of Nicolai Herzog, Anton Jonsson and Tuomo Nieminen.

Tom van de Vogt won the die roll and elected for his team to kick off. The first booster was pretty unexciting as van de Logt took a Viridian Longbow and shipped a Bonesplitter to his team-mate Jesse. Herzog got a Shatter, Jonsson an Iron Myr and Nieminen a Somber Hoverguard as Stijn Cornelissen wheeled a Trolls of Tel-Jihad.

Jesse first picked a Pewter Golem, which gave a One Dozen Eyes to Nicolai. Jonsson went into white with a Raise the Alarm. A Skyhunter further consolidated him in that colour from the next booster. Tom got a Leadfoot Ogre and another piece of equipment in a Banshee Blade. Stijn took a Creeping Mold and was clearly in green as was Nicolai as he picked up Predator's Strike.

Nothing too exciting was happening at the moment but that changed with Anton's booster. He opened it and a Molder Slug was staring straight back at them. Unfortunately to get to Nicolai the booster would have to pass through enemy territory. This pick turned out to have major impact on the draft.

Schietkoe continued with their fixed plan as Jesse picked up artefacts and blue cards, Tom took a Skyhunter Patrol to move into red-white while Stijn added to the green with Predator's Strike. Tuomo was building affinity as he got a Thoughcast.

Now it was time for the directions to switch. Stijn opened the first of the second boosters and was happy to see a Grab the Reins sitting there. The Molder Slug left Burkas a decision about whether they should change strategies but the boosters didn't seem to want to let Nicolai switch into black-red. He picked up a Fangren Hunter and Anton got a One Dozen Eyes from the same booster. A Terror followed in the next booster for Nicolai, but it ended up being the only black card the Norwegian took although it still made his deck.

The rares continued to be a rather poor selection of Spoils of the Vault and Tower of Aeons, although Jesse was lucky to open up promise of power. Black wasn't making an appearance at all on the Scandinavian side of the table and Nieminen was currently blue with a solitary Consume Spirit. Maybe Darksteel would change things.

By now Burkas had resigned themselves to sharing green between Anton and Nicolai, but as black continued to be poor it didn't seem to matter. Nicolai picked up an Ageless Entity as Jesse first picked an Arcbound Fiend that was nice to go with the Tangle Golem he'd got from the first Darksteel booster. Not to be outdone his opponent, Stijn, matched him for fat with a Tangle Golem of his own and a Vulshok War Boar.

Anton got two Razor Golem, many pro's favourite out of Darksteel but at the cost of letting his opponent, Tom van de Logt get hold of two Test of Faith. Jesse continued to find fat black rares with a Greater Harvester while Tuomo ended up having to ditch black completely in favour of a Barbed Lightning and Dismantle. In the end the Scandinavian's ended up playing only one black card, the splashed Terror in Nicolai's deck. 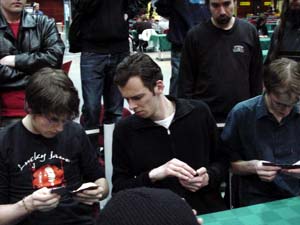 Afterwards they debated about whether Anton should have took the Slug as it bent them out of shape a little. As it is the matches should be fairly close. Jesse is playing blue-black, but with few cheap artefacts it could hardly be called affinity. Tuomo might just have the speed and evasion to be two quick for him. Tom has a useful looking red-white deck including a Spikeshot Goblin that just lacks the really standout equipment to make it fantastic. Jonsson has a similarly useful white-green deck with Molder Slug. Lastly Nicolai and Stijn will be bouning massive green monsters off each other in the red zone. It should be a close final.