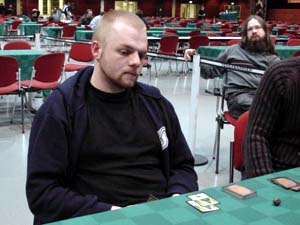 is certainly the most experienced player in this matchup, having just won GP Amsterdam a few months ago. Cornelissen is a veteran team player, though, having played in various Dutch teams in the last few Team Pro Tours. Both have green decks, but got slim pickings in the draft. Nicolai's creatures are slightly better, but Stijn has the powerful Grab the Reins to swing games.

Nicolai wins the "flip" (actually a guessing game regarding the serial number on Ornithopter), but has to mulligan. He starts off the game with a turn two Goblin Archaeologist. Seems like the lack of a coin to flip will come back to haunt him. Stijn answers with an Alpha Myr. Nico plays Granite Shard on turn three, and Stijn only has Whispersilk Cloak. The Myr is pinged on Nico's next turn, and he swings with the archaeologist. Stijn swings in with a hasted Vulshok Berserker.

Nico was lacking in the land department, having only 3 lands with a couple of Berserkers in hand. He had no play. The Dutchman equipped his Berserker and swung in. Nico chooses not to try to kill the Cloak and takes 3 more. A Tel-Jilad Chosen came out for Cornelissen. Nicolai drew a Viridian Joiner but chose not to play it for some reason. Stijn attacked again and Nicolai takes 3. At the end of turn, he tried to kill the Cloak. A spectator produced a die for the to roll, but Nicolai missed and loses his goblin. He finally plays the Joiner and blocks the Chosen, pumping it with Battlegrowth. Stijn plays Trolls of Tel-Jilad. Nicolai has no play again. A Fireshrieker seals the deal for Stijn. Nicolai could possibly have survived another turn by playing the Shatter he had in hand, but chooses not to remind his opponent that he has it.

At this point, all three Nordic players were 0-1. Nicolai seemed a bit dejected at this sordid state of affairs.

This time it was Stijn's time to mulligan, while Nicolai was happy with his hand. The first play of the games Stijn's turn two Tel-Jilad Chosen, while the Norwegian just had a turn three Darksteel Ingot. Stijn added another little beater in Tel-Jilad Wolf, while Nicolai had a bigger gun in Ageless Entity. Unfazed, Stijn swung in with his Wolf, signaling a Predator's Strike. Nico took two and Stijn played an Arcbound Hybrid. Nico untapped and swung with the Entity, which was not blocked, and followed up with Tel-Jilad Outrider. The Wolf and Chosen came back in, and Nico blocked the Wolf with the Outrider. The expected Predator's Strike allowed the Wolf to live and deal 4 damage to Nico as well.

Nicolai had only an Alpha Myr for his next turn, but that was enough to hold back the Dutchman's weenie tribe. Stijn had no play for the next turn, and Nicolai chose to swing in with the Entity. He then played a Berserker and passed, having two mana open for Predator's Strike. The Dutchman killed the Myr with Echoing Ruin and swung with the team. Nicolai blocked the Chosen, and played Predator's Strike after damage was on the stack. He was down to six, but Cornelissen had no play. Nicolai found another land, enabling Wurmskin Forger and Goblin Dirigible in his hand. Stijn had only one card at this point, but Nicolai was worried that it would be Grab the Reins. He finally decided that he couldn't play around the gamebreaker, and just swung with his team, taking the Dutchman to 5, Nicolai being at 6. He then played the Dirigible and hoped for the best. Cornelissen thought for a long while, as is customary amongst that family, and swung with the Wolf, taking the Norwegian to 4. No Grab The Reins was in sight for Cornelissen, and Nicolai was allowed to untap. This gave him an opening to play Wurmskin Forger. Nicolai thought long and hard where to put the counters, trying to figure out whether he could play around the Shatter. All this thinking didn't matter though, as the Dutchman didn't have it anyway, and died to the pumped Dirigible.

Both players kept their first hands, with Nicolai having 6 mana cards in hand and a Fangren Hunter. The first play was his, with an Iron Myr hasting out a Vulshok Berserker. Stijn had no turn three play, but played his own Berserker on turn 4, swinging back. Nicolai busted out his Hunter, and was looking at the dream start for a red/green mage. However, his hand was now all lands, and he had to try to keep up the pressure somehow. The Dutchman played a Clockwork Vorrac, which meant that Nicolai would have to swing in with both creatures, leaving the board empty except for Nico's myr. He played Talisman and Ingot, and the Dutch played an Arcbound Hybrid and attacked. 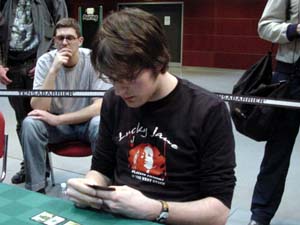 Nicolai was at this point hoping to draw a Darksteel Colossus to go with his enormous supply of mana, but none was forthcoming. Instead, Stijn played a Trolls of Tel-Jilad. Nicolai got another land, and was beat down by Stijn's huge creatures. The Myr had to chump the Troll, and Stijn followed up with a Tel-Jilad Chosen. Goblin Dirigible wasn't going to do it for the Norwegian, prompting a concession.