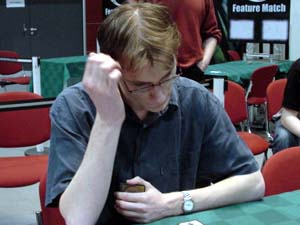 was playing a blue and red deck based on affinity, while his opponent Jesse took a black/blue artefact-build into the field.

Tuomo mulliganed a hand that featured no lands but a single Darksteel Citadel. His second hand appeared to be better. Jesse started off with an Arcbound Stinger followed by a Thunderstaff, while Tuomo played a Silver Myr, a Lumengrid Sentinel and a Steel Wall. Jesse's next play was the huge Greater Harvester who threatened to end the game rather quickly - one way or the other!

As calm as always Tuomo played on and made a Vulshok Morningstar. The following turns the Harvester ate Jesse´s lands and got chump-blocked. Jesse paid five life to draw five cards off a Promise of Power not to run out of gas for the Harvester. A Relic Bane on Tuomo's Morningstar took chunks out of his life, while he struggled to chump the Harvester every turn. A Somber Hoverguard got equipped with the Morningstar, and took out the Harvester together with a Drill Skimmer, while Jesses Arcbound Stinger, equipped with a Bonesplitter, dealt damage to Tuomo. He tried to play a Spire Golem, but Jesse had an Annul for it, laid down a fistful of creatures onto the table and heard the two magic words from his opponent: "Your game!"

Tuomo started by playing Aether Spellbomb, Silver Myr and Welding Jar. Jesse was going to make him pay for that by laying down a Disciple of the Vault and a Bonesplitter, although he didn`t attack with it. Tuomo added a Vulshok Morningstar to the table, and Jesse played the Thunderstaff. Drill Skimmer appeared on Tuomos side of the table, while Jesse attacked with the Disciple but had no play.

Tuomo took down the Thunderstaff with a Dismantle. Jesse played and equipped a Frogmite, while Tuomo summoned a Somber Hoverguard. Tuomo´s flyers started coming in, while Jesses Frogmite died from a blocking equipped Silver Myr, which was regenerated with the Welding Jar afterwards. Jesse summoned a new attacker with a Pewter Golem, but couldn`t prevent Tuomo´s big flyers from tearing big chunks out of his lifepoints. The Golem tried to attack once, but got bounced by an Echoing Truth. "Your game", Jesse stated.

Jesse started with a Bonesplitter, but Tuomo played the first creature - a Silver Myr. Jesse enchanted Tuomo´s Darksteel Citadel with a Relic Bane. Tuomo thought for a while and added both Sun Droplet and Aether Spellbomb to his side of the table, while Jesse played a Cobalt Golem. Toumo seemed to have a good answer against the Relic Bane, when he played a Rust Elemental. Jesse equipped his Cobalt Golem with the Bonesplitter and sent him into the red zone. Tuomo decided not to block and took four points of damage, charging his Sun Droplet in the process. After combat Jesse added a Quicksilver Behemoth to his side of the table, which got bounced back at the end of his turn with the Aether Spellbomb. Tuomo sacrificed the enchanted land, attacked and enchanted the Golem with a Psychic Overload. Jesse added the Thunderstaff to his side of the table, followed by the Quicksilver Behemoth. Life totals were rather equal at that point, with both players at 14. But as long as Tuomo could feed his Elemental he dealt damage to Jesse. In order to keep his Elemental around he tried to domineer the Overloaded Cobalt Golem, but Jesse had an Annul ready for it.

Jesse now attacked with the Behemoth after equipping it. Tuomo took the damage, but sent the Behemoth back with a Echoing truth at the end of the turn. In his turn he sacrificed the Sun Droplet to the Rust Elemental and played a Drill Skimmer. Jesse made a Frogmite and cast the Behemoth again, equipping the Frogmite before passing the turn back to Tuomo. The Fin sacrificed his Myr, going down to the Drill Skimmer as the only food for the Elemental, and attacked Jesse down to five. 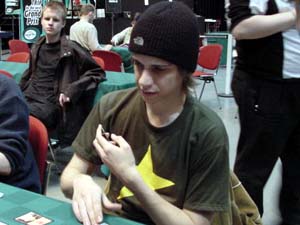 The Dutch sent in both his creatures - Tuomo being at nine - and threatened to deal eight points of damage or ten, if he used the Thunderstaff. Tuomo didn`t block with the Drill Skimmer - he would have died from the Rust Elemental in his next upkeep. Jesse used the staff, increasing the power of his attackers, and took the chance of losing parts of his defence. But Tuomo didn´t have anything and it was game, set, match for Jesse and Team Schietkoe.