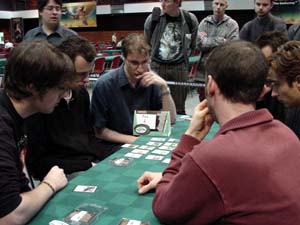 match pits the Dutch Schietkoe team against the French NPC All Stars. Tom Van De Logt heads the team of two Cornelissen brothers, while the French team consists of Alexandre peset, Sylvain Lehoux and Loic Degrou, the former fresh off a PT Top 8 in Kobe.

The Dutch team won the coin flip and chose to kick off the draft.

Lehoux took an Auriok Transfixer for his first pick, Peset continuing his heavy black commitment with Consume Spirit. Tel-Jilad Chosen went into Degrou's deck. Stijn then picked a Vulshok Berserker, Tom a Relic Bane, and Jesse got an off-color spellbomb for his affinity deck.

Peset again didn't need to commit to a second color when he opened an Icy Manipulator. Degrou got a Tel-Jilad Archers, a strong card against the affinity deck. However, this left Myr Enforcer and Nim Replica for Jesse's deck. Tom got a Leonin Skyhunter, Stijn took a Copper Myr, and Lehoux wheeled a Raise The Alarm and Irradiate.

Degrou was happy to get another Archers against the Jesse's affinity deck when he opened his first booster. Stijn got a Krark-Clan Grunt, Tom took a Raise The Alarm, and Jesse got a Somber Hoverguard. Lehoux wheeled a Pyrite Spellbomb and a red myr, and Peset got another of his beloved Banshee's Blades. This left Rustmouth Ogre for Stijn.

The last booster of the first set was pretty weak, Stijn taking a Tel-Jilad Chosen, Tom taking the slow Vulshok Battlegear, and Jesse getting a Consume Spirit - not the best affinity card, but probably playable. Lehoux got Hematite Golem and Auriok Transfixer, Peset a Frogmite, and Degrou hate drafted a Cobalt Golem.

After the first round of boosters, all of the players had decent starts to their decks. Jesse's deck was looking like a really good B/U affinity deck, while his opponent had some protection from artifacts guys that should be good in the matchup. Lehoux has a decent start to a R/W deck, while Stijn has some good R/G cards. In the middle matchup, van de Logt has a good start to a W/b deck, while Peset took some questionable picks and is looking like a disaster.

The second round of boosters started with Stijn picking an Electrostatic Bolt. Unfortunately, this left a Leonin Sun Standard for his opponent. Degrou got a Viridian Longbow, and Peset took a Consume Spirit. This left a huge wheel for Jesse with Myr Enforcer and Wizard Replica, both amazing cards in the affinity deck. Van de Logt got a talisman and a Nim Shambler. The French clearly had no affinity player, and suffered because of it. Peset could possibly have taken the Enforcer over the drain, but it's unclear how good it would be in his deck.

Degrou opened the next booster, taking Vulshok Battlegear over Vulshok Berserker, probably a mistake, as the Battlegear is usually a bit slow. Peset took a Moriok Scavenger, and Lehoux got a Blinding Beam. Jesse took Neurok Spy, and Tom Soldier Replica. Stijn then got a decent wheel in Predator's Strike and Trolls of Tel-Jilad. Tom then hated Ogre Leadfoot, and Jesse hated Vulshok Berserker, leaving a Spellbomb for Lehoux. This was probably a mistake, as the Leadfoot isn't all that good, and spellbombs are always a wanted commodity in the affinity deck. Instead, Tom could have hated the Berserker and left the Spellbomb for Jesse. However, the French are getting into trouble here, having no blue mage to pick up the Neurok Spy. Perhaps Peset should have moved into B/U affinity earlier, or maybe Lehoux should have abandoned his red in favor of blue. 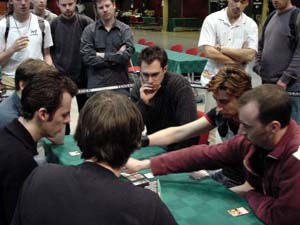 The third booster was a disaster for Peset, only yielding him a red Myr. Again, he could have taken a Somber Hoverguard if he were blue. Lehoux got a much-needed Bonesplitter for his white deck, and the flier went to Jesse. Tom, took an Ancient Den, and Stijn took a Deconstruct. Degrou got a nice wheel of Rustmouth Ogre and Slith Firewalker. Stijn got a Forger on the way back, and Jesse got a nice pick in Seat Of The Synod for his affinity deck.

Lehoux was next to open, finally getting something worthwhile in a Grab The Reins. The game-winning instant was picked with little deliberation, while Jesse got a Silver Myr and Tom got a Mask of Memory. Stijn got another Electrostatic Bolt. On the wheel, Degrou got Pyrite Spellbomb and another Rustmouth Ogre, the third in the draft. Peset wheeled Nim Lasher and Alpha Myr, staying in mono-black.

Jesse's booster contained the powerful Lodestone Myr, adding more insanity to his affinity deck. Perhaps he can use the same deck for his Nationals this year ? Tom got a Terror, and Stijn a Tel-Jilad Archers. Degrou wheeled Pyrite Spellbomb and Altar's Light, Peset got Goblin War Wagon and a Talisman, and Lehoux got Vulshok Gauntlets and Frogmite.

The final Mirrodin booster was opened by van de Logt, who took a Culling Scales. Stijn then took a Tel-Jilad Archers, leaving Crystal Shard and Somber Hoverguard in the pack. The Dutch had probably realized that there were no blue drafters on the other team. Degrou took another Pyrite Spellbomb, and Peset had to take the Crystal Shard. Lehoux took the generally poor Soul Nova, leaving Somber Hoverguard to Jesse.

After the second set of boosters, the French were hurting even more. The boosters were full of good blue cards, and they didn't have a blue drafter. This made Jesse's pile absolutely ridiculous, although Degrou had some good cards in the matchup, like multiple Tel-Jilad Archers and Rustmouth Ogres. Peset really wanted to draft mono-black it seems, as he has a couple of Consume Spirits and the early Nighmare Lash. Tom has what's shaping up to be a powerful B/W deck, but is perhaps a bit shy on cards. Stijn's deck is really good as well, and Lehoux has really nothing that can deal with Stijn's fat creatures, as he had no good fliers at this point.

The Darksteel packs needed to be nice to the French for them to have any chance at this point. Tom opened the first pack, and the French team frowned when seeing Sword Of Light And Shadow and Skullclamp in the pack. The sword went to Tom, and Jesse got the clamp, a nice card in the affinity deck as most type 2 players know by now. Lehoux had to contend himself with Drill Skimmer, while Peset finally got something good in Murderous Spoils, a possible bomb against Tom's white equipment deck. Degrou took Unforge over a Karstoderm to be able to deal with the clamp. The Karstoderm went to Stijn, a fine card in his matchup. He also hated an Essence Drain. Lehoux finally hated a Spire Golem that noone on his team could play.

The second booster gave Jesse another Skullclamp, putting some oomph in his otherwise mediocre deck (!). Lehoux got a Razor Golem, and Peset had to take an Arcbound Worker as there were no black cards of note in the pack. Degrou got Specter's Shroud and Stijn got another Karstoderm. Van de Logt wheeled Loxodon Mystic and Drill-Skimmer, and Stijn hated a Neurok Prodigy.

Lehoux booster had no good white cards, and after lots of waving of arms and facial gestures, he randomly took a Whispersilk Cloak. Peset couldn't have been happy to have to pick another Arcbound Worker. The Darksteel boosters seem to have forget their supposed to be good in black. Degrou got a bomb for his matchup, a Furnace Dragon that should be devastating against Jesse. Stijn took an Unforge, and Tom took a Darksteel Gargoyle. Jesse had a nice wheel of Spire Golem and Vedalken Engineer.

Peset desperately needed something to happen for him, but the best card available in mono-black was Arcbound Stinger. He reluctantly took it, and Degrou took an Echoing Ruin. This left a Leonin Battlemage, Razor Golem and Loxodon Mystic as the best cards. Stijn hated the Razor Golem, and Tom took the Battlemage. Jesse took a Neurok Prodigy, leaving the tapper for Lehoux.

The penultimate booster gave Degrou a Vulshok Morningstar. Stijn took an Arcbound Crusher, possibly a hate draft, after checking that Jesse would rather have a Quicksilver Behemoth for his deck - probably a wise choice considering all the fat Degrou was accumulating. Tom got a Razor Golem. A Stir The Pride went to Lehoux, and Peset took a Scavenging Scarab and Slobad, Goblin Tinkerer.

In the final booster, Stijn drafted a Dismantle, giving Tom his second Leonin Battlemage. Jesse hate drafted Razor Golem over taking Neurok Prodigy, as he didn't really need any more cards. A Loxodon Mystic went into Lehoux pile, and Peset got another Arcbound Worker, as well as hating the Neurok Prodigy. 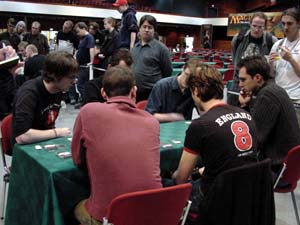 All in all, the Dutch had a much better draft than the French. All of the matchups are seemingly in their favor. Jesse's amazing affinity deck is facing off against the artifact-hating R/G deck in Degrou's hands. This should be a slaughter, although Degrou does have some good cards for the matchup - his Tel-Jilad Archers might be able to stall the game to a point where his Rustmouth Ogres can become relevant. He also has plenty of removal for Jesse's Somber Hoverguards. In the end though, he will probably have to mise with Furnace Dragon to win. Alexandre Peset seemingly has no deck, with some small, fast Arcbound beaters and the very powerful Nightmare Lash. Tom has a good black/white deck with double Leonin Battlemage and Sword of Light and Shadow. The final matchup is pretty lopsided, with Stijn's solid R/G deck facing off against Lehoux's red/white deck that never really came together. Lehoux has very few ways to deal with the many fat creatures in Stijn's deck and should crumble quickly. Prediction: Shietkoe wins 2-1 or 3-0.