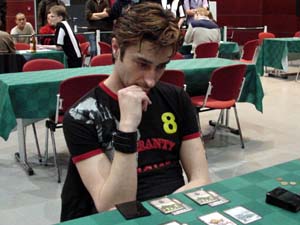 , member of Schietkoe, is a former World Champion. Peset is coming fresh of a top 8 in Pro Tour Kobe, and is playing on NPC All Stars. Tom drafted an amazing black/white deck featuring 2 Leonin Battlemage, Sword of Light and Shadow, and other assorted goodies. Alexandre got a seemingly suboptimal mono-black deck with a very low manacurve.

Tom won the die roll and chose to play first. His opening hand was Sword of Light and Shadow, Vulshok Battlegear, Mask of Memory, Loxodon Mxstic, Leonin Battlemage and 2 Plains. After thinking it over, Tom decided that it was worth the gamble and kept it. His gamble didn´t pay off however as his first two draw steps yielded Darksteel Gargoyle and Betreyal of Flesh. Alexandre in the meanwhile had an blazing fast start to punish Tom´s manascrew: 2 Arcbound Worker and Disciple of the Vault were out by turn 2. Alexandre however only attacked with one Worker on turn 3, fearing Raise the Alarm which Tom didn´t have. He improved his board with Banshee´s Blade and Grimclaw Bats. Tom found his 3rd land and made Sword of Light&Shadow. It seemed he might make it into this game if he´d draw a land, but he needed one right now. His next draw yielded Darksteel Gargoyle and Tom could only shake his head. Alexandre added a Scavenging Scarab to his force, and after not drawing a land again Tom scooped.

Tom played first again and this time his opening hand was better: turn 3 Razor Golem is a great start! Alexandre´s opening was fast as well with turn 1 Arcbound Worker, turn 2 Grimclaw Bats and turn 3 Frogmite, but all those little guys lacked the quality of Razor Golem. Tom played an unspectacular Drill Skimmer on turn 4, while Alexandre´s turn 4 was spectacular. He cast Nightmare Lash, equipped it to his Bats and swung for 5! Unfazed, Tom took his turn and attacked with both his creatures, making the life totals 14-9 in his favour. He then improved his board with Leonin Skyhunter and Soldier Replica. What an incredibly fast race; and this was just turn 5!
Next up, Alexandre improved his board with Arcbound Worker and Disciple of the Vault and hit with his Bats for 5, neglecting to use the pump ability with his remaining mana. On his turn, Tom attacked with Leonin Skyhunter and laid Stalking Stones and Soldier Replica, leaving mana open for its ability and Drill Skimmer on defence.

Alexandre then thought for a while on his turn, trying to figure out the optimal play in this difficult situation. His board now consisted of Grimclaw Bats equipped with Nightmare Lash, 2 Arcbound Worker, Disciple of the Vault, Frogmite and 5 Swamp. Tom´s board was Leonin Skyhunter, 2 Soldier Replica, Razor Golem and 6 lands including Stalking Stones. Tom was at 9 life and Alexandre at 7. 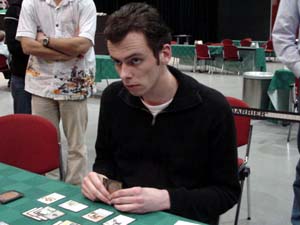 Alexandre finally settled on an attack with his Bats. Tom chumped and took 1 from the Disciple since his Drill Skimmer hit the grave. After the attack, Alexandre played Consume Spirit for 5 on Tom´s Leonin Skyhunter. Tom untapped, drew a land and slammer Darksteel Gargoyle, bringing the game to a stall. Were it not for the Disciple of the Vault, I´d say Tom was in a good position to win the game. But with lots of artefacts on the board and Tom only at 8 life, it actually seemed like the opposite was true. Alexandre drew Goblin War Wagon and attacked with Arcbound Worker. Tom blocked, lost a life to the Disciple and the War Wagon grew to 4/4. Tom´s draw steps yielded no answers in the meanwhile, only 2 1/1s: Leonin Elder and Auriok Glaivemaster. Tom traded Soldier Replica against the 4/4 War Wagon in the next attack phase, losing 2 life in the process. Alexandre topdecked Arcbound Stinger and next turn he equipped his Nightmare Lash to it. Since Tom had only one flyer and now the Stinger and the Bats were lethal, Alexandre´s next attack finished Tom and gave him the match win.