Veröffentlicht in Event Coverage on 13. September 2003

As the end of Day 2 draws near, the debate rages on. Which strategy is more effective? Each has its proponents, and a third school of thought opines that the choice is totally irrelevant. Whatever the truth may be, we're about to ask eight Pro Tour - Boston teams about their preference and the reasoning behind it.

What are your thoughts with regards to kicking vs. receiving in Rochester Draft? 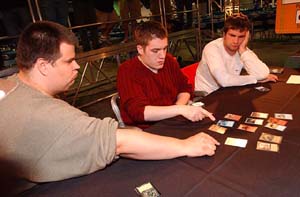 Kai Budde: Right now we feel that kicking is better. The reason is that if you kick and open Pit Fighters, your colors are still flexible. If they kick and you open Pit Fighters, you probably have too many cards to make a switch--you've already taken six or seven. Also, because you sacrifice fewer picks when switching colors, it is easier to avoid things like double Murkdiver against your black deck.

Mike Long: Well, the basic idea is this--kicking lets you play your bombs where you want them. You're not locked into colors, and you can react to your opponents.
SB: You're saying that kicking actually lets you react?

Mike Long: Yes. But the thing is, Kai's team just kicked against us, and we destroyed them in the draft--as much as one can destroy them in draft, anyhow. (chuckles) I mean, I guess it went well enough for them that they won, but . . .
SB: So the question, then: If (3 x 1)-1+1 was asked to decide right now for your next draft, what would you choose?

Elijah Pollock: We always thought receiving was way better, not for any logical reason, but because the receiving team won literally 90 percent of our practice drafts. We couldn't explain it!

Gary Wise: Receiving is the most immediately reactive, but kicking is more reactive than receiving in the long run. You can wait until the receiving team has established their colors, and then go from there. We've been doing very well in our practice drafts receiving, though I'm not sure if that is because we've played against teams of individuals who haven't drafted together often.

Bob Maher: I think it's flat out "You have to kick." If you open a bomb fifth pack, it might not be in your colors, but if you open it second pack, you're certainly playing it.

Matt Vienneau: We receive, everyone else kicks. Seriously. We're the only ones who do it.
SB: And why do you do it?

Matt Vienneau: It's long and complicated, I'll write an article about it later! (laughs) Ok. If you receive, you get to choose the two black players, and we'd rather have two black players than two red players.

Scott McCord: We have our colors set prior to draft, so we want to give the other team as little chance to be reactive as possible. Because that is the case, we have to kick. The adaptive teams like putting certain combinations against others, for example blue-green against red-green or white-black against red-black. Our strategy is designed to give them less chance to do that.

Huey: I think receiving is good, because I was told so. We're 3-0 when receiving, so there you go.

As you can see, Magic fans, no consensus has been reached, even with the Top 4 almost on top of us! The kickers and the receivers will be doing battle on Sunday, with all the glory on the line. Once the dust settles, maybe we'll have a clearer picture of which strategy really does have the advantage.

Veröffentlicht in Event Coverage on 13. September 2003