Daniel Zink is the 2003 World Champion!

Three days and eighteen rounds of gaming hadn't dimmed the competitive fire in the eyes of Japan's Jin Okamoto and Germany's Daniel Zink. Not even the prospect of the Wake Mirror, one of the most gruelling matchups, could keep them from putting their best game forward. Both had experienced it already. Zink took down Jeroen Remie in the quarterfinals in four games, and then in the semifinals Okamoto did the same against Tuomo Nieminen. That meant it would be the hometown hero against Japan's first Worlds Top 8'er.

The finals were a knock-down, drag-out affair, in which Zink declared himself king of the Wake Mirror. He trounced Okamoto in three straight games, taking the title of World Champion to the applause of his countrymen.

If you missed any of the action, or just feel like reliving the highlights, be sure to check out the archive of our live feed (which will be available on Tuesday, August 12)! See the team draft unfold, and watch the finals in all its detail! And all from the comfort of your own home. 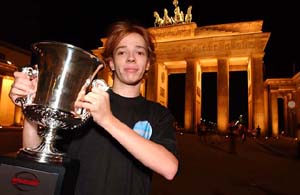 You can read coverage of the entire event here. Downloadable video of the Top 8 action will be available on Sideboard.com later this week.