t was a thrilling weekend of competition in Memphis as the best mages on the planet gathered for the 2008 Magic World Championships. When the dust settled, one man stood above the rest: Finland's Antti Malin. Playing a unique take on Standard Constructed powerhouse Faeries, he rocked his way through a Top 8 packed with some of Magic's biggest names.

Coming into the weekend both Rookie of the Year and Player of the Year were hotly contested, and the intrigue lasted all weekend. Shuhei Nakamura had a big lead for Player of the Year coming into Worlds, but a lackluster performance the first two days had players right on his heels. One by one they fell away, but Hall of Famer Olivier Ruel was in the hunt right until the final rounds. Finishing just outside the Top 8, he had to cede the title to Nakamura.

Even more nailbiting was the race for Rookie of the Year. Australian National Champ Aaron Nicastri had helped lead his team into the Team Finals facing off against the Americans (who were fresh off a win against the Japanese). But while he was busy on the team stage, Hannes Kerem, captain of the Estonian team, had won himself a berth in the individual Top 8. He defeated no less than Kenji Tsumura in a tough five-game match, but his bid for Pro Tour glory and Rookie of the Year status was cut short by Malin in the semifinals.

Nicastri couldn't pause to celebrate his newfound title. Facing the Americans, he was first to fall, defeated by Sam Black in Extended. While Michael Jacob and Brandon Lau split their first two games of standard, they watched as Paul Cheon slowly took apart Justin Cheung in Legacy, making the Americans the World Team Champions.

Back in singles action, America's Jamie Parke had edged out Paulo Vitor Damo da Rosa in the quarters, and then demolished Tsuyoshi Ikeda. But Malin would not be denied. In a four-game finals, his Faeries prevailed over Parke's Five-Color Control. 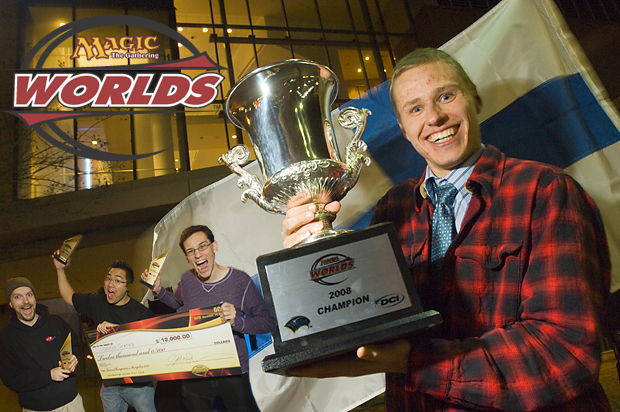 Here are links to a few key stories from the weekend, in case you missed them: