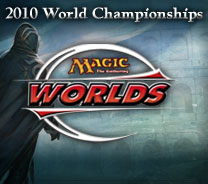 he 2009 Magic Pro Tour season concluded in Rome at the World Championships, and now it's time to see how the dust has settled. Worlds showcased the best players in Standard, Extended, and Zendikar Booster Draft. What Standard and Extended decks did the best against the field? Was Jund the juggernaut everyone thought it would be in Standard? Did Rubin Zoo continue its run from Pro Tour-Austin in the Extended rounds? Paul Jordan crunched the numbers for all the major deck archetypes. If you're looking for the hard numbers on what beat what, you won't want to miss it.

Rich Hagon walks you through all four days of Worlds, recapping the daily angles as well as the big-picture storylines such as the Player of the Year and Rookie of the Year races. You can listen to the podcast via the player to the right, or go to the Podcast page to download it.

And if you missed the Top 8 webcast, Evan Erwin has edited the individual and team finals down to highlight clips that you can watch right here. If you want the full story, sit back and check out the complete Top 8 videos.

As an added bonus, here are the Opening Ceremonies featuring the Parade of Nations and the 2009 Hall of Fame Induction Ceremony.