It has been a year of emotional turmoil for Hong Kong native Lee Shi Tian. From being unsure at points if he would be able to continue on the Pro Tour to being enveloped in protests in his hometown, Magic has been one source of consistency in a tumultuous past year.

"Magic has really helped my mindset and helped me understand and apply many of the theories I learned in business school," Lee began.

"The most memorable moment of the year for me was actually Grand Prix Moscow," he admitted. "I had 42 Pro Points when I booked my flight from Hong Kong to Moscow. After starting the tournament with three byes, I immediately went 0-2, putting myself in pretty bad shape. I ended up rallying and coming back from that to not only make Top 8, but secure Platinum for Pro Tour Magic 2015! Moscow was such a beautiful city, and all of the Russian players were very kind to me." 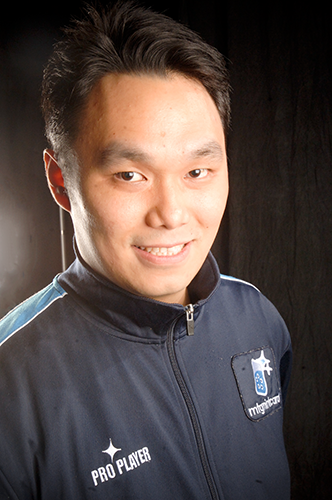 It has been a long, twelve-year journey for Lee from his beginnings as a new player in Hong Kong to the pinnacle of the game. He's the first player from Hong Kong to achieve the level of success that he has, but he was never alone in his quest.

"Lee Wei Hao, Benjamin Yu, and Wilfred Ng are three players who have meant a lot to me as I have become the Magic player I am today," Lee revealed. "They are the first friends that I met when I started playing Magic. We had a Mischievous Quanar/Early Harvest combo deck that we ran against a field of Mirari's Wake and UG Madness decks. I guess that's where I started getting addicted to combo decks."

His addiction to combo decks has paid dividends for him, as two of his three Pro Tour Top 8s, all in the past two years, have come at the helm of combo decks. His first, at Pro Tour Return to Ravnica in 2012, was with the Modern Scapeshift deck. More recently, his incredible Round 16 performance with his Jeskai Ascendancy Combo deck left viewers speechless, and Lee himself in tears.

"Playing in the World Championship proves that it is possible for a Hong Konger to be a professional gamer. I have mentioned in interviews before how difficult it is for a professional gamer to survive in a culture like the one in Hong Kong. I have seen far too many talented players get buried without a trial and have their skills wasted. Still, I made it through another year and even managed to get Platinum."

"The leaders in gaming are American, Japanese, and Korean. While gaming in Hong Kong might not be as developed as those leading countries, I hope that my results can prove that the industry is something worth investing in."

Lee has had tremendous success, and he has done it in the face of incredible pressure. He is well-prepared for the road ahead, and the high-profile roadblocks that will be standing against him at the World Championship. Never one to back down, even in the face of overwhelming odds, Lee stands ready for the competition.

"Shaun McLaren is definitely one of the players I am looking forward to facing," Lee said. "The only time I had a chance to try and beat him, the match ended up in a draw. I think his style of play is really good against mine. There's also a saying in the APAC region—Never beat Yuuya. It started in 2012, when Yuuya [Watanabe] casually took down all of the APAC Grand Prix during the year. I'd love a chance to ‘beat Yuuya'. I guess those two are the nemeses for me at this event, though every player is so good that I am really happy to play against anyone."