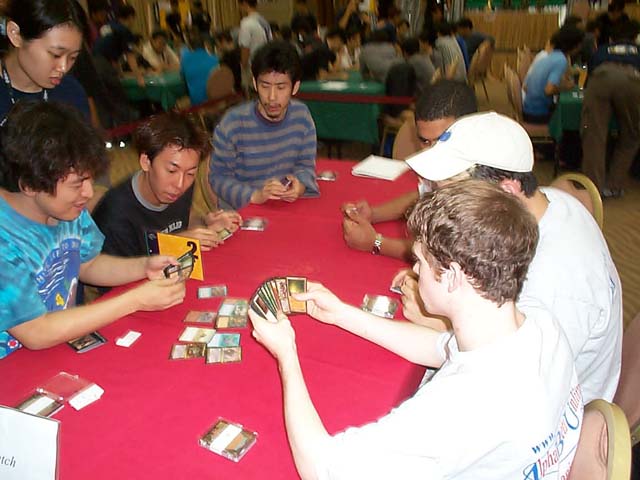 The color lines were drawn early in this draft, with a first-pack Stalking Assassin setting Toshiki Tsukamoto into blue-black, and Ikeda and Williams clearly heading into the red-black mirror. The first few packs were gold for Benafel, netting him two Excludes, Fact or Fiction, and Armored Guardian. Clegg's green base accepted a Darigaaz easily.

In the middle seat, Jun Nobushita was aiming for Green-White-Red, and he drafted two Lightning Darts, excellent against Benafel's Blue-White. Still, the bulk of the quality cards were in ABU's hands.

Planeshift continued the trend. Though Ikeda opened the table's only Flametongue Kavu, Benafel scored back-to-back Stormscape Battlemages. He then got a Hunting Drake and a Cavern Harpy to further abuse the trio.

Williams was raking in the Lava Zombies, drafting three of them, while Ikeda only found a Terminate and a bunch of Gray Ogres. Nobushita drafted some good weapons, namely Fleetfoot Panther, Slingshot Goblin and Nemata, Grove Guardian, but would be hard pressed to keep up with Benafel's beats.

The only Fire Beat Member to truly prosper was Tsukamoto, who got goodies like Nightscape Familiar, Hobble, Silver Drake, Hunting Drake and Allied Strategies.

Going into Apocalypse, it looked like the color breakdown was: 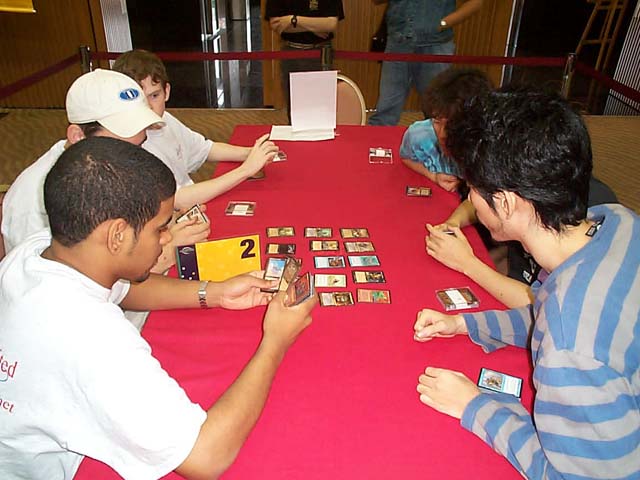 Nobushita opened Desolation Giant, and snapped it up. For the rest of Apocalypse the players merely filled out their decks. Williams picked up what little he could find, like Zombie Boa and Urborg Uprising, but generally played the role of spoiler, cutting off powerful multicolored cards so he teammates could take the cards they needed.

Benafel scored a Coastal Drake, Coalition Honor Guard and Mystic Snake, as well as fixers like Helionaut and Reef Shaman. Clegg went into his fourth color for Cetavolver, Gaea's Skyfolk and Guided Passage, as well as the ability on Savage Gorilla, and got powerful tricks like Illuminate and Consume Strength.

Ikeda, sensing that he wasn't going to have enough cards in straight red-black, went into blue for Minotaur Illusionist and Coastal Drake. Nobushita took whatever Red-White made it past Williams, including Squee's Embrace, Goblin Legionnaire, Flowstone Charger and Angelfire Crusader.

It's a strong statement for ABU's chances in this round that David Williams needed only a handful of cards from Apocalypse to have a competitive deck.