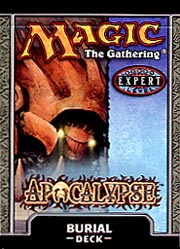 he best way to win with the "Burial" deck is to play an enormous horde of Zombies and swarm your opponent. Strength of Night, which can give all your Zombies +3/+3, certainly helps. The deck has over twenty Zombies, so you should be able to quickly stink up the table with them. If you ever run into a Zombie shortage, Grave Defiler and Phyrexian Arena can help you get more.

The "Burial" deck contains a lot of versatile cards. Llanowar Dead gives you both early-game mana and a beatdown threat. Play Foul Presence on your own creature and then tap it to kill other creatures-or play it directly on an opponent's small creature to kill it. Putrid Warrior can cause everyone to lose or gain one life. Usually you want everyone to lose one life, but opt for the life gain if you're low on life or if you have Phyrexian Arena in play. Soul Link can also boost your life total if you play it on one of your creatures that's attacking successfully, or you can use it to neutralize an opposing threat. It also goes great on a blocker, ideally Grave Defiler.

Zombies are cheap and plentiful, but they fall apart rather easily. That means the "Burial" deck might have trouble against a deck with lots of big creatures. One way to deal with them is to gang up on attackers. Also, don't forget that Grave Defiler can regenerate; it can hold off a big creature indefinitely. The deck is also stocked with creature-kill spells, which range from the straightforward (Annihilate, Death Grasp) to the tricky (Dead Ringers, Consume Strength). And because green has the biggest creatures, the "Burial" deck includes a couple of Phyrexian Reapers that are custom-made for rubbing them out.

Since the "Burial" deck has three colors, getting the right color of mana can be a problem. For example, Llanowar Dead can give you black mana, but you must have black mana to play it in the first place. If you feel like you're having too many mana problems, try adding extra cards that can provide more than one kind of mana. Of course, that would mean you'd have to get rid of some of those precious Zombies! 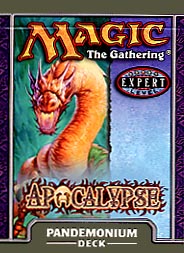 aving trouble deciding which color to play? With the "Pandemonium" deck, you can avoid the issue by playing all the colors. Your opponents will cower in fear as you unleash a variety of different threats. And with the Apocalypse set's Penumbra creatures at your disposal, the threats continue long after the cards go to your graveyard.

Playing the "Pandemonium" deck is all about being able to get the right mana. Multicolored decks can be tricky to play because you'll often draw spells of one color and lands that produce another. By using mana-fixing cards such as Lay of the Land and Harrow, you get the colors you need when you need them. Gaea's Balance can also fix any color deficiency, but be careful if your opponent has any counterspells. If Gaea's Balance is countered, you'll have already sacrificed five lands and you won't get them back.

In most games you won't have anything to attack with for several turns. That's okay-you'll be busy getting all five basic land types so you can play your more powerful spells. The Penumbra creatures provide early defense, and with their back-from-the-dead ability, you shouldn't hesitate to trade one for another creature in combat. Because your opponent can sometimes bring out a whole swarm before you play any threats, don't be afraid to play a card like Emblazoned Golem early, before you can pay its maximum kicker cost. The same is true for the "domain" cards. Tribal Flames kills a 2/2 creature when you have two kinds of land in play just as well as it does when you have all five.

The "Pandemonium" deck has several weaknesses. It's vulnerable to flying creatures, and it doesn't do well against decks focused on controlling the board. To give the deck some sharper teeth in the late game, as well as to help against control decks, consider adding Urza's Rage. If you're still having problems, try adding some more utility cards, such as Allied Strategies or Exotic Curse. Finally, if you want to get serious, think about adding a creature that will make other players jump when it hits the table. Maybe Cromat would get your opponent's attention. 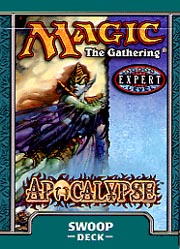 ou've seen theme decks with lots of flying creatures before. What makes the "Swoop" deck different? Two things: It's got green in it, and it's bouncy! The way to win with this deck is to distract your opponent while your squadron of airborne critters pecks your opponent to death.

How do you distract your opponent? That's where the green cards and bouncy cards come in. Big green creatures provide ground defense while you mount your air attack. You can use spells that "bounce" permanents, such as Temporal Spring and Repulse, for several purposes: To buy time to whittle down your opponent's life total, to clear a path for your flying attackers, or to save important cards you control by returning them to your hand or library so you can play them again.

Repulse, Rushing River, Coastal Drake's ability . . . these seem straightforward, but you can pull off a lot of tricks with them. Sure, you can just get some damage through by bouncing potential blockers and attacking. But try this: Wait for your opponent to gang-block one of your bigger creatures. Then, before damage is assigned, bounce one of the blockers. Often, your attacker will survive and destroy any blockers left in play. Here's another trick: Let's say one of your creatures is about to die in combat and take an enemy creature with it. Wait for combat damage to go on the stack, then bounce your own creature. Even though it's no longer in play, its damage will still be dealt to the enemy creature. Then you can replay your rescued creature.

There are two ways to go to improve this deck. One is to put in more creatures that change colors along with more spells that take advantage of this effect (like Jaded Response). Or you could remove the color-changing theme entirely and just focus on beatdown creatures and bounce spells. The Invasion set's Kavu Climber and Kavu Titan are both excellent candidates for a "stomp and bounce" deck. Replay the Climber to draw another card, or play the Titan as a 2/2, then play Repulse on it and replay it as a 5/5. It's like watching a rerun that gets funnier each time you see it! 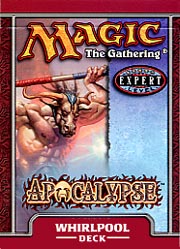 It's time for an adventure! We've returned to one of the most popular worlds in all of Magic: Zendikar. It's a world of wild mana, plucky adventurers, and treasures for those daring eno...