t is a truth universally acknowledged, that a Magic player in possession of a free weekend, must be in want of a fan convention to go to. You've got your PAX Prime, PAX East, Gen Con, even the mighty Comic Con International in San Diego. And then there are numerous smaller conventions at which a Magic fan can have fun.

But just in case you're at a convention in 2011 and you're not having enough fun, Wizards of the Coast is going to be giving away a promotional version of Bloodthrone Vampire. 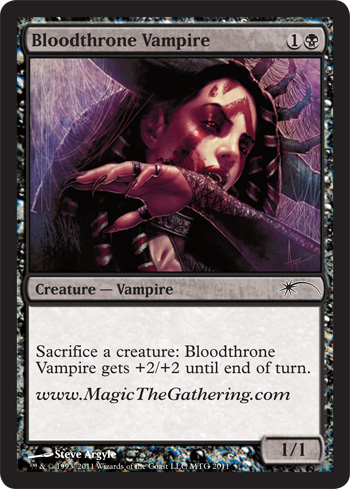 Incidentally, we here at MagicTheGathering.com are very fond of this flavor text.

This promotional Bloodthrone Vampire will be available at the conventions listed above, as well as some number of smaller conventions that hasn't been completely finalized yet.