About That Fifth Ultimatum...

ack in October, we showed you the Planeswalkers responsible for the action in Brilliant Ultimatum, Clarion Ultimatum, Titanic Ultimatum, and Violent Ultimatum. As you no doubt noticed, one Ultimatum was skipped. But now that Nicol Bolas, Planeswalker has appeared in Conflux, we thought it might be fun to go back to Cruel Ultimatum and look for hints of Bolas's presence.

The original art description for Cruel Ultimatum said this:

Location: Grixis, inside a towering necropolis, in a huge room made of blackened skulls and bones of all kinds
Action: Show something no one would expect to see: a great, winged demon lord . . . cowering in a corner. Maybe's he's even clutching a gut wound that oozes black blood. On the walls around the cowering demon we see the huge shadow of a figure whose shape is distorted by the skulls and bones of the room's walls. The shadow reaches an outstretched, clawlike hand toward the demon.
Focus: the scene
Mood: A creature of supreme evil dominance, brought low and terrified.
Notes: The shadow should suggest some kind of enormous humanoid dragon or dragon/demon hybrid. It's meant to be a very subtle clue/teaser for a character that players won't see until later.

Here's the sketch that Ralph Horsley turned in: 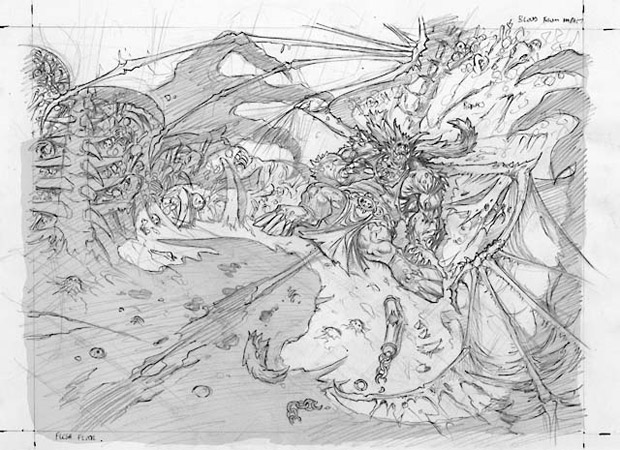 The final version had the shadow downplayed to make it more of an Easter egg. Mouse over the final art to see the shadow! 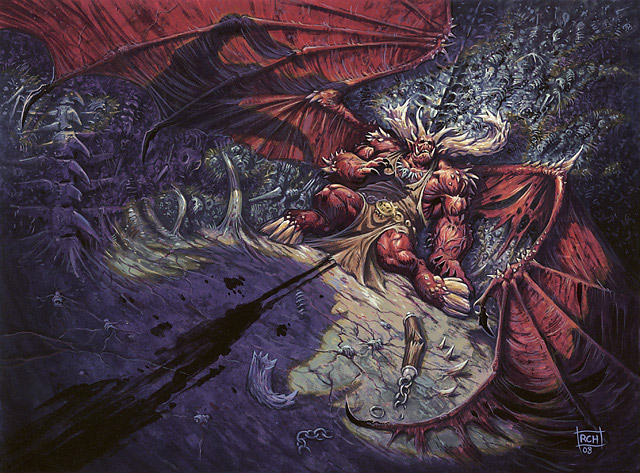 And here's the final card!