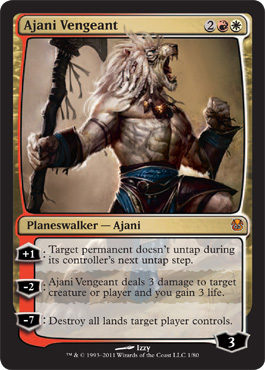 Life, passion, community, and the wild—these are what flourish without the influence of black or blue mana. In the lush land of Ajani's home, life is celebrated, and instinct triumphs over machination.

With a veritable zoo of ferocious beasts at its beck and call, Ajani's deck will make short work of an unprepared opponent. Early on, you'll be operating a focused beatdown machine, battling with some of the most efficient creatures in the game. Over time, the deck transforms into an engine of life-gain synergies that both help you to survive and ultimately defeat your opponent.

For one mana, you won't find many creatures more powerful than Wild Nacatl, Kird Ape, and Loam Lion. On the surface they are mere 1/1 creatures, but they get buffed up when you control lands of the appropriate types. The shape of your early turns will largely be dictated by which land is needed to provide the boost, and this need will guide you as you cast Sylvan Ranger, cycle Sylvan Bounty, or sacrifice Evolving Wilds. After this trio has softened up the opposition, you can unleash even more powerful monsters like Woolly Thoctar and Marisi's Twinclaws.

Gaining life in a duel sometimes only prolongs an inevitable defeat, but a strategic boost to your life total can also buy enough time to secure a victory. Ajani's deck can use a card like Sylvan Bounty to simply survive for another turn, but more important are its repeatable life-gain effects like Ajani's Mantra and Recumbent Bliss. They make Ajani's Pridemate and Ageless Entity increasingly threatening attackers. Also, each time you gain any life, Searing Meditation provides a 2-point blast of damage. Fleetfoot Panther is one tricky cat. Like Briarhorn, it has flash, which means you can cast it when it will be most awkward for your opponent. Use it as a surprise blocker, save one of your green or white creatures from a removal spell, or return a creature like Loxodon Hierarch to your hand so you can cast it again and gain an additional 4 life. If you control Essence Warden, you can even have the Panther return itself to gain 1 life for each

At some point, your fearsome offense will run out of steam and you'll need a way to get in the last few points of damage. Firemane Angel and your token-makers give the deck resilient threats. Nacatl Hunt-Pride's ability to dictate combat will help you to break late-game stalemates. Because it has vigilance, you can even attack with it and then use one of its abilities before your opponent has a chance to declare blockers. Spitemare and Pride of Lions, on the other hand, can deal damage to the defending player (or to Nicol Bolas, Planeswalker) whether they're blocked or not, while Griffin Guide, Behemoth Sledge, and the awesome Titanic Ultimatum allow you to ignore defenders by flying over them or smashing right through them. But who says you even need the combat phase? With Searing Meditation, Lighting Helix, and Ajani's Helixesque second ability, you can simply end the game with a flurry of direct damage. 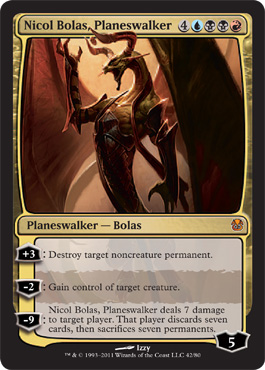 Nicol Bolas, Planeswalker's malevolence is matched only by his boundless intellect. Compassion and respect for life don't enter into his plans. He will go to any lengths to regain the godlike powers that were once his.

To win with Nicol Bolas, Planeswalker's deck, you have to think like the elder dragon: plan for the long term, and when the opportunity to strike arises, be very, very cruel. With an endgame built around some of the most devastating spells in Magic history, including Profane Command, Cruel Ultimatum, and Nicol Bolas, Planeswalker himself, your victory depends on escaping the early onslaught of Ajani's deck relatively unscathed. Early on, you should play conservatively, using creatures like Brackwater Elemental and Fire-Field Ogre to deter attacks while you build up your mana. You don't want to get into a situation where you and your opponent are both attacking for damage. Ajani's deck has so many lifegaining effects that winning such a race is a near-impossible task, even if you start out ahead. Instead use cards with incidental life-loss like Countersquall, Undermine, and Agonizing Demise to harm your opponent while you leave your creatures on defense.

Nicol Bolas, Planeswalker is a master of manipulation, and you'll follow in his scaly footsteps. Recoil, Ogre Savant, and Vapor Snag are among the most vital cards in your deck, forcing your opponent to pick up threatening creatures and spend another turn casting them. Early in the game, these cards simply buy you time to build your defense. Later on, they're a vicious prelude to your countermagic or discard effects, ensuring that those cards never see the battlefield a second time.

Accordingly, one of the deck's lines of attack comes through effects that force the opponent to discard. Run the Ajani player out of cards and you can more readily take control of the game. Spells like Pain (of Pain // Suffering) and Fall (of Rise // Fall) are better used later in the game when your opponent is holding only a card or two. Slavering Nulls, Dimir Cutpurse, and Blazing Specter cause a discard when they connect, while Elder Mastery turns any creature into an evasive powerhouse that will demolish the opponent's hand in short order. Ajani's deck doesn't have many answers to an enchanted creature, so be careful to play around instant removal spells to make sure the Elder Mastery sticks. When your opponent is down to two cards or fewer, your pair of Hellfire Mongrels will start dealing damage every turn.

As tempting as it might be to cast Jhessian Zombies and Igneous Pouncer, you shouldn't hesitate to cycle them if it means you'll be able to cast Cruel Ultimatum or Nicol Bolas, Planeswalker. Both spells can transform a losing position into a victory. By the time you're able to cast it, Cruel Ultimatum will often leave your opponent with no nonland permanents and an empty hand, while at the same time leaving your hand replenished. Nicol Bolas, Planeswalker, meanwhile, can protect himself by gaining control of an opposing creature. Once he's safe from attack, build up to his ultimate ability, an effect so powerful that it makes Cruel Ultimatum look positively kind by comparison. 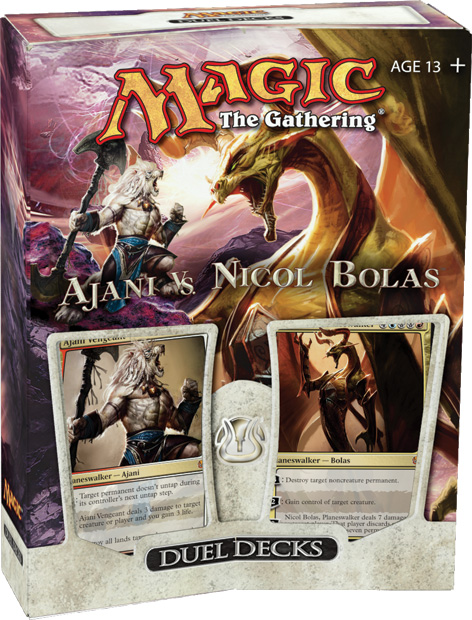