e were looking through these images of the Alpha Playtest Cards, and we ran across a few things that were kind of interesting. And then we thought, well, what if we shared them with the world in an Arcana? And here we are now!

Playtest cards, of course, often exist in a world without templating. This is especially true when you're talking about cards made before the game even exists. Still, this struck us as odd: 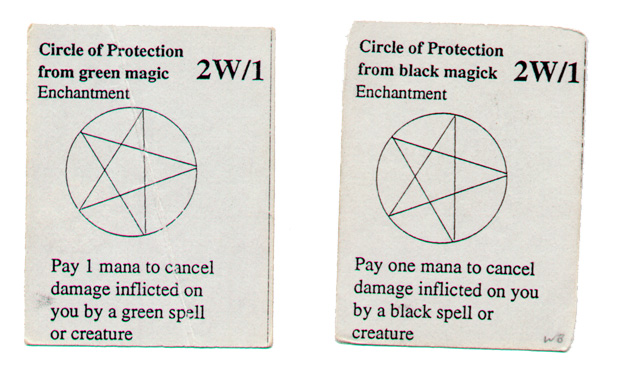 Here we have the Circles of Protection for green and black. For some reason, the green one affects "magic" and the black one affects "magick". The other three also say "magic", which means that you could construct an elaborate theory connecting this random spelling difference and the lack of Circle of Protection: Black in Alpha. The theory would be wrong, but it's still tempting.

You've heard the story of the playtest card that said "Opponent loses next turn." which could be read as either "Take two turns in a row" or "On the next turn, your opponent loses the game," right? Well, here it is. But here's the twist: it's red! 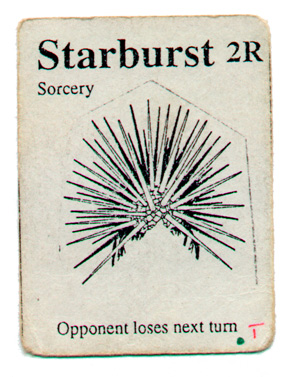 Blue also had that effect, and it's a more recognizable Time Walk: 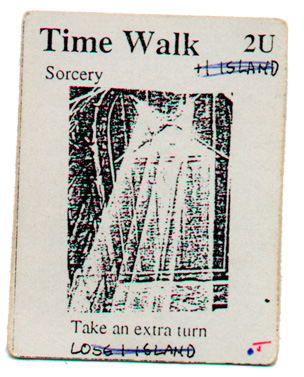 It looks like it had "Sacrifice an Island" as as additional cost at one point, but that appears to have been short-lived.

Finally, we're always entertained by the clip art chosen to illustrate various cards. Here's one we particularly like. 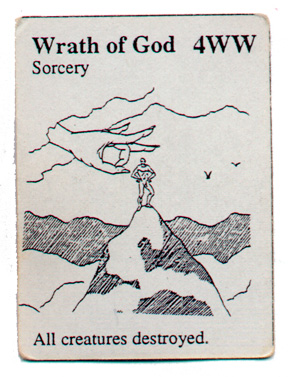