hat does this screenshot tell you? 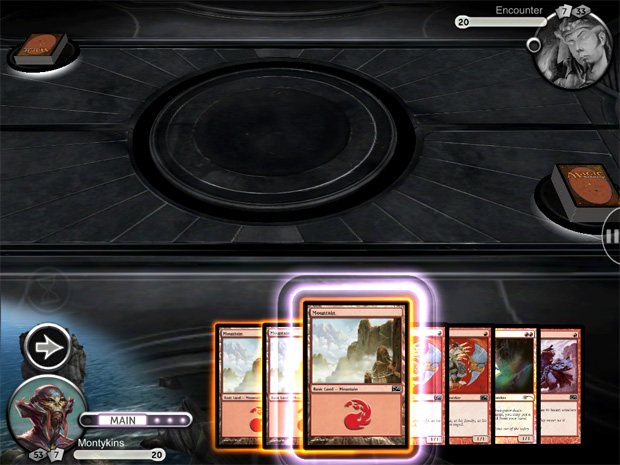 Well, first it tells you that I'm going to have a pretty quick start to my game. I figure I'll start with a Raging Goblin, then play Warren Instigator on turn two and use Shock to push it through on turn three. If I draw some expensive goblins to accelerate into, this should be a pretty short game.

But it also tells you that the back of a Magic card is different in Duels of the Planeswalkers! For reference, here's a regular Magic card back. 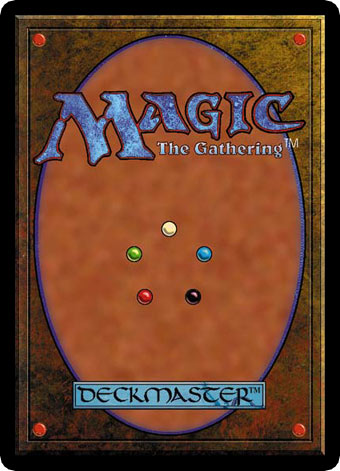 Looks familiar, right? It contains all the familiar elements of a Magic card, including the Deckmaster logo (which is there to indicate that Magic is a Deckmaster game, along with Netrunner and Vampire: The Eternal Struggle, neither of which have been made by Wizards of the Coast for many, many years) and the five mana symbols. Now let's see the Duels of the Planeswalkers version!

Ah! The "Deckmaster" logo has been removed. That makes sense, since the only Deckmaster game that's still around is Magic. Also, the Magic: The Gathering logo has been changed from blue to yellow. This also makes sense, because the logo is yellow practically everywhere you look (like in the top left corner of this very web page), except the back of a Magic card. It pops more in yellow, don't you think?

Note that there are no plans to change the back of the real Magic cards. They're staying exactly the way they've been since 1993, even with a stray pen mark on the Deckmaster logo.