A hunter to the core, and adept at summoning savage creatures, Garruk Wildspeaker thrives on pushing himself to greater and greater limits in his quest to be the ultimate predator. But now, he faces his most dangerous prey: A fellow Planeswalker.

Specializing in spells that reanimate the dead, corrupt the living, and unlock power from death, Liliana Vess possesses beauty that belies her necromantic power. What will happen when a force of raw, untamed nature confronts a being consumed by dark and demonic urges?

These ready-to-play 60-card decks showcase some of the best spells that green and black Planeswalkers have in their arsenal. Duel Decks: Garruk vs Liliana has eight rare cards, and six cards with new artwork, including foil alternate-art versions of Garruk Wildspeaker and Liliana Vess. Each of the cards in the 60-card decks will be black-bordered and tournament legal. This means that these cards are legal for use in any tournaments where the original printings are still legal. 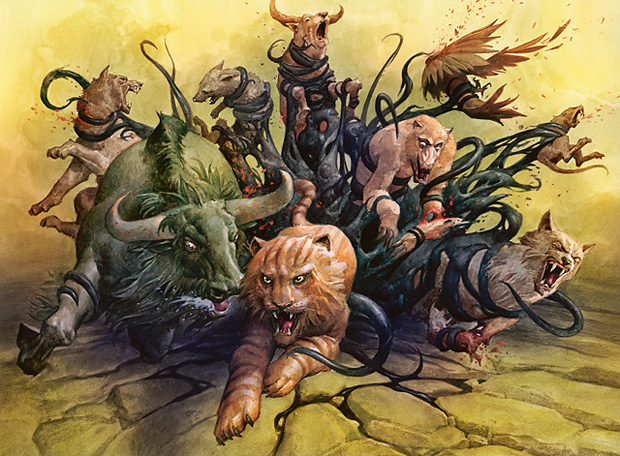