lenty of people love Magic... but not all of them love it enough to write and perform a song about it!

Here's a letter we got recently from Steve Wolf, who did exactly that with his (get this) combination play group / barbershop quartet. Below the letter you'll find a video of Steve's group performing the song, along with the lyrics. Enjoy!

I've been a Magic player since Revised. I'm also a very active barbershop singer! A few months ago I taught the guys in my quartet to play and they've all caught the bug too. Last weekend we got together for a rehearsal and ended up playing A LOT. At about 3 in the morning over a game of Two-Headed Giant we starting making up a parody to "Come Fly With Me" about our game. Hence the line about Guile not having flying (that surprised our bass singer when he played it—he assumed it did 'cause the picture had wings, then felt like a dork when he actually read the card, haha).

Anyway, half an hour later we finished and recorded a video to put on YouTube so we could send it to you guys. Hope you like it! 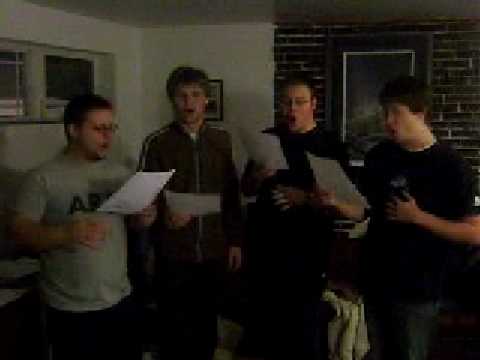 Hey here's what's on my mind
Lets you and me unwind
So grab your cards and
Well have a real good time!
Yeah yeah yeah

It's Magic time
It's time for us to play! (let's go and play)
A PTQ is the place for you
And for me to be all day.
The tournament
Will soon be underway (it's underway)

If Faerie decks
Have really got you down (don't frown)
A Firespout will be your way out
And you may just win this round
And Sarkhan Vol
Will make your name renowned! (make it renowned)

Would someone please tell me
Why the card named Guile can't fly?
He's got wings!!
Uh-tell me
Why oh why?
But when there's a new set
And the Prerelease is near
You will hear
Players cheer, "This game is awesome!"

Count your lands
Try not to overpay (o-o-verpay)
We all can learn
From some mana burn
As we tap the hours away
The artwork and mechanics
Make us shout "Hooray!"

So grab your cards
Come on its time to PLAY
Come on guys lets end the song
Time for
Magic all DAY!