“The Past Returns” Week on magicthegathering.com, so of course we have to say a little bit about this card:

Although it’s an Unhinged card, the card’s concept revolves around a Time-Spiral-like return to the past in just about every way possible on a Magic card. It has the old card face (now new again thanks to the Time Spiral timeshifted cards), old mechanics such as madness, cycling, and buyback (now new again thanks to Time Spiral), the old tombstone icon (this is truly a sign of the past now—the icon was not revived in Time Spiral), and even an old-school Magic artist in Douglas Shuler. 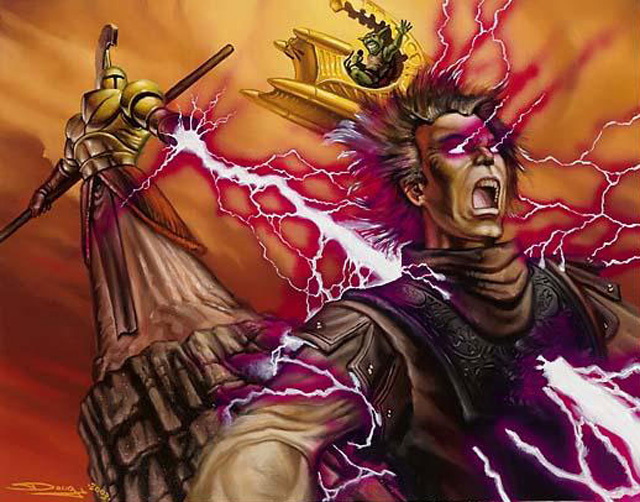 Blast from the Past art by Douglas Shuler

Note that Doug’s name was intentionally, lovingly misspelled “Schuler” on Blast from the Past to revive yet another part of Magic’s past—the unfortunate accidental misspelling of his name on several Alpha cards. Poor Mr. Shuler! What a good sport!

Note also that the goblin in the art of Blast from the Past is seen riding Unhinged’s Time Machine. That Time Machine ultimately crashes in the art of another Unhinged throwback, Old Fogey (also a Shuler/“Schuler” card), a creature with banding, phasing, rampage, and protection from Viscerid Deepwalker. Summon Dinosaur, indeed (not you, Doug!).