The Blasted Grave of Yawgmoth

part from being a handy way to power up the Magus of the Coffers or fuel a big Tendrils of Corruption, Planar Chaos's Urborg, Tomb of Yawgmoth is a haven for storyline. The presence of the dark lord Yawgmoth was a pox on Dominaria, and even now the site of his destruction plagues the land. Check out the art description for the card for some good backstory tidbits, and John Avon's sketch and final art below.

Color: Black
Action: Show a wide shot of an expanse of Urborg, the famous dark land where the Phyrexian Invasion began and ended. The focus of the landscape should be a huge, sickly 'blast radius' -- the place where the dark lord Yawgmoth fell. From the pitch-black center, the stain on the land spreads outward like tentacles of black mana corrupting the land. In the background can be seen the shattered remains of Volrath's mountain stronghold, now with its metal cap mostly corroded away and no Magic emanating from it.
Focus: the site of Yawgmoth's death that still poisons the land
Mood: The land is tainted with evil forever.
Notes: LINK to Art ID #3762 for Stronghold reference. 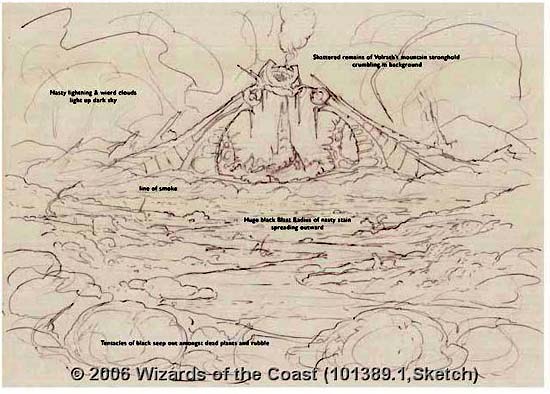 The creative team wanted the Stronghold to be pushed off in the background slightly, since it's not really the focus of the card. With that in mind, John Avon completed the piece to everyone's grim satisfaction: 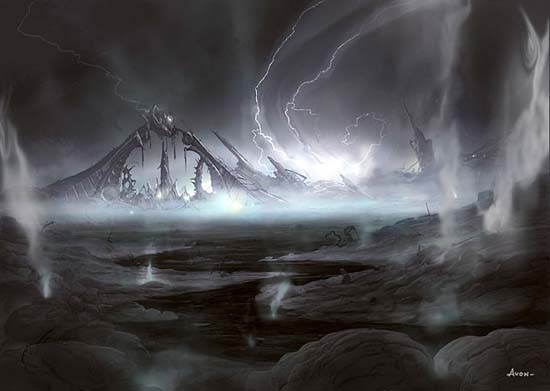 So what's art ID #3762, the item referred to in the art description? Surely it's the art for Volrath's Stronghold? Actually, no-it's the art of Skyshroud Archer, which happens to have a very good wide shot of the evil Stronghold in the background. 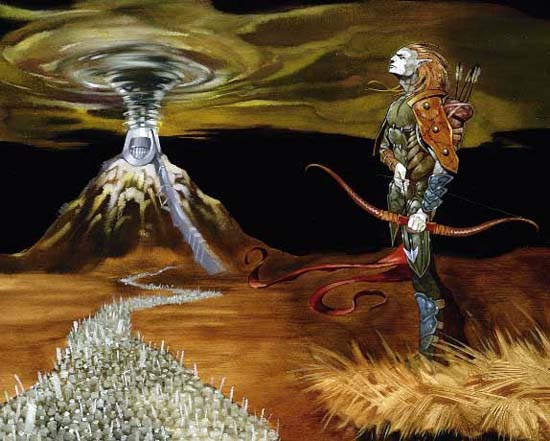