month, we announced our Magic Holiday Cookie Contest, and now it's time for the results!

All entries were judged by a blue-ribbon committee of experts, with "Magic theme," "creativity," and "holiday cheer" each being worth 33% of the total score. First, let's look at the ten runners-up, each of whom won two randomly-chosen Lorwyn theme decks. 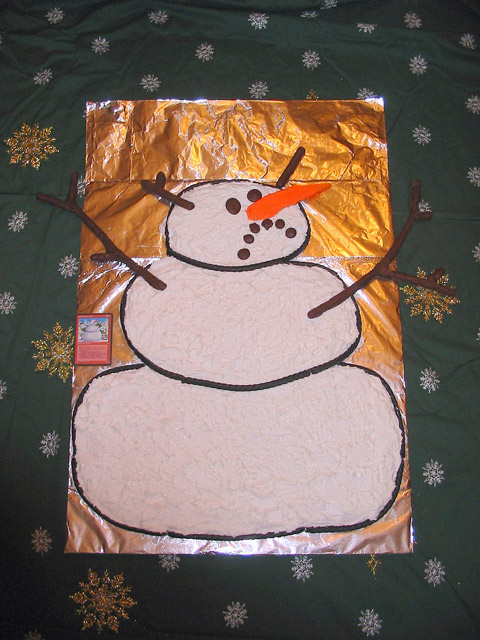 Kim says: "I have to admit that I had a lot of fun creating this life-size version of the Goblin Snowman. The entire snowman cookie is edible and we donated the finished product to my children's school for the teachers to enjoy on their break." 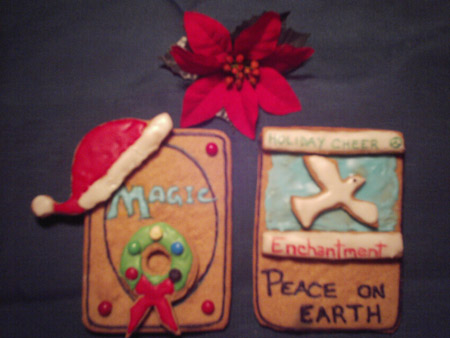 The judges decided that there was a lot of holiday cheer in getting together with your friends to eat cookies at a Magic shop. 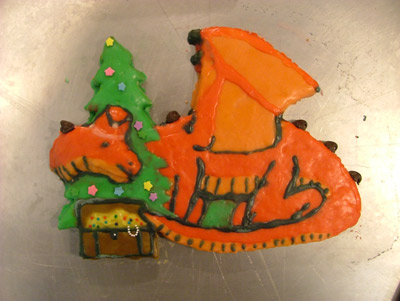 Zane's description of the cookie says: "A dragon celebrating the holidays and enjoying a treasure chest full of gold. Covered in frosting, sprinkle diamonds in the treasure, and mini-chocolate kisses for back spines." 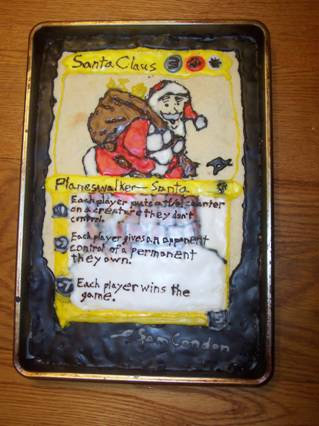 Sam's version of Santa as a Planeswalker is all about giving gifts:

Santa Claus
3RW
Planeswalker--Santa
+1: Each player puts a +1/+1 counter on a creature they don't control.
-3: Each player gives an opponent control of a permanent they own.
-7: Each player wins the game.
As Sam says, "I may have made him just slightly overpowered, but he IS Santa Claus, after all." 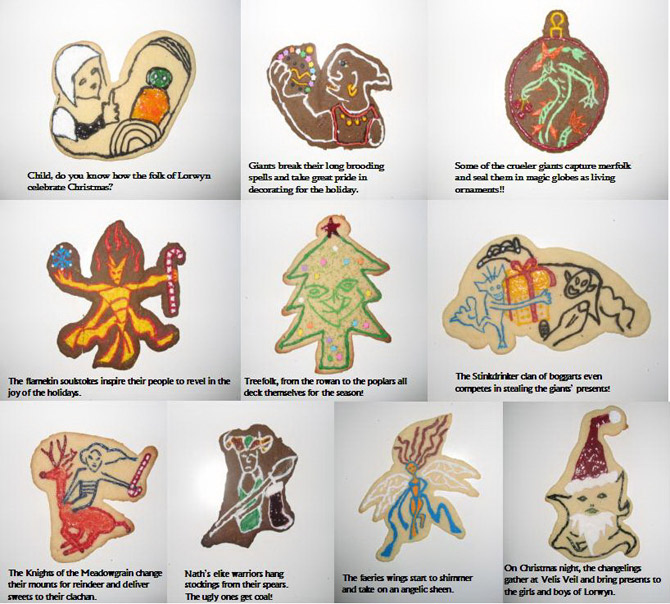 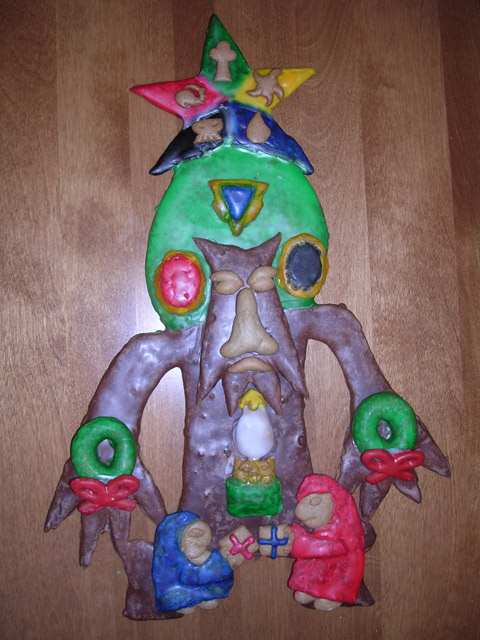 Jesse writes: "My friends and I have been debating whether or not the card Sheltering Ancient is useful...well, I finally found a use for it in my entry! The cookie is entirely gingerbread with sugar glaze; it includes the Treefolk and figures from the card, all dressed up for the holidays, as well as all five Moxes as decorations! "

Timothy gives us another heartwarming -- oh no! Santa! Look out for those zombies! Noooooo! He writes, "I thought it best to preserve the traditional ginger-bread-man form for the zombies, as it seemed the best integration of your requirements that the content be both M:TG and holiday themed." 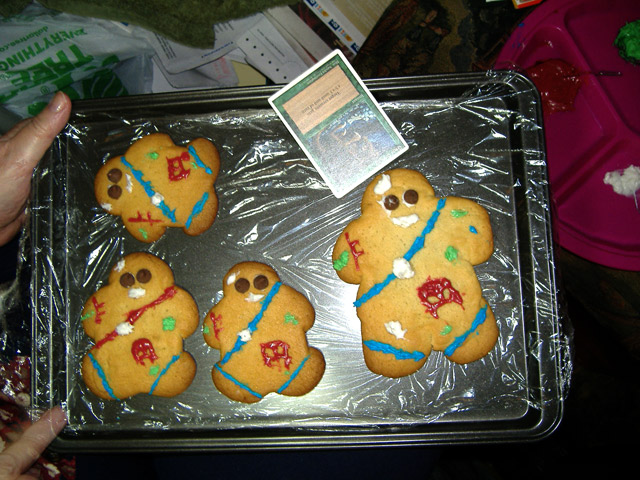 Bedford writes: Attached are my entry for the Cookie Contest. Four STUFFY DOLLs, one of which was GIANT GROWTHed, which was later put on THE RACK. (Couldn't get to my somewhat-blackish Black Vise)." Here's the racked Stuffy Doll: 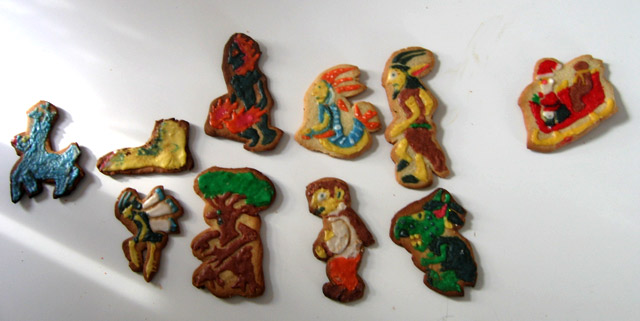 Not bad! Let's take a closer look at some of those!

Nathan writes: "Santa and his eight tribal reindeer were trying to spread christmas cheer this holiday season, but alas something was just missing. So Santa found a reindeer giant elf mutant zombie illusion bird .... shapeshifter to lead his crew and light his way. Happy Holidays."

Congratulations to all the runners-up. Let's go to the two second-place winners!

Nicely done! Let's take a closer look at that camel! 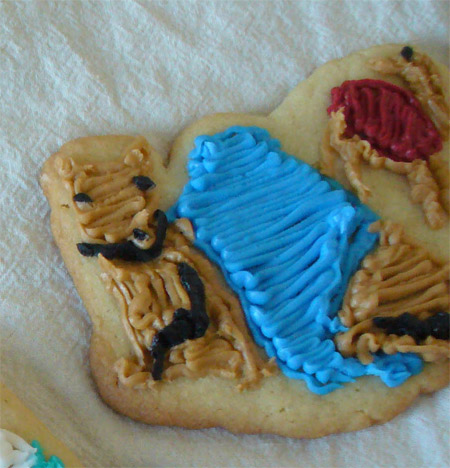 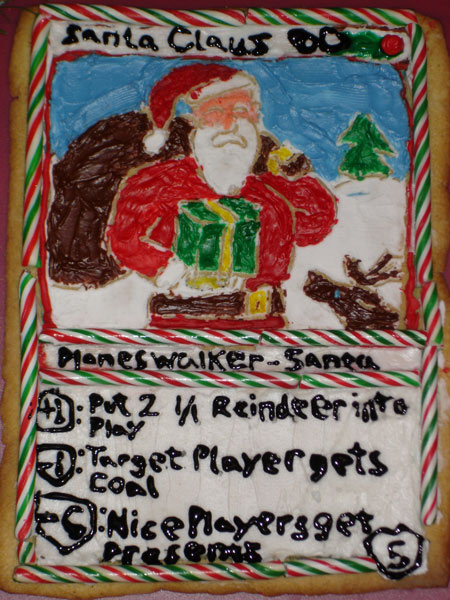 The complete text of Robert and Lenny's rendition of Santa is:

Santa Claus
1WRG
Planeswalker - Santa
+1 Put two 1/1 reindeer tokens with flying and bands with other reindeer into play
-1 Put a coal counter on target player.
-6 If there are 8 or more reindeer in play all players without coal counters search there libraries for a card and may play that card without paying its mana cost.
It looks pretty tasty, too:

Of course, the true spirit of the holiday is declaring a winner. And that winner is... 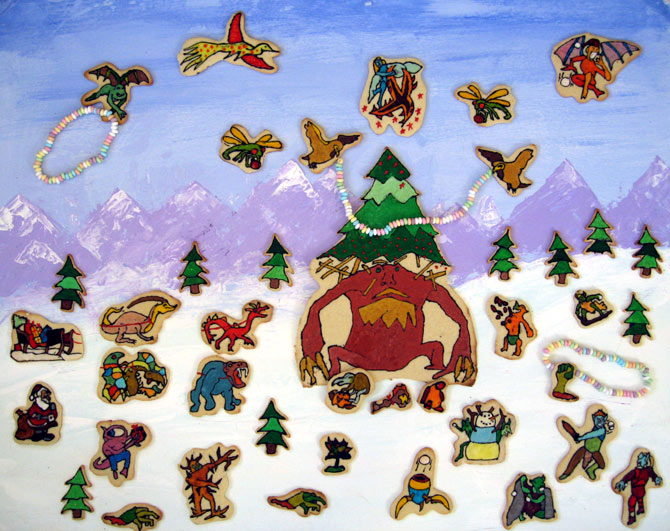 Paul was far and away the winner (and takes home a foil set of Lorwyn for his troubles!). He says: "The concept centered around all the MTG creatures putting away their differences during Christmas, enjoying the holiday, and all pitching in to decorate a tree. The goblins, of course, couldn't help starting a snowball fight with the elves and a few beasts gave Rudolph and the gang a day off."