We're taking a two-week holiday break and will be back with new stuff on Monday, January 2, 2012. Until then, please enjoy our favorite Arcanas of 2011. This article originally ran May 25, 2011.

t's time for the finale of Core Set Survivor! But first, let's recap how we got here and explain the concept for people who just got here.

The original Magic core set was Limited Edition Alpha, which contained 285 cards, not counting basic lands. Then all of those cards were reprinted in Limited Edition Beta, which also added Circle of Protection: Black and Volcanic Island, which had been mysteriously left out of Alpha.

Then Revised had a slightly different set of cards, and only 250 of the cards from Alpha were still in the core set. Fourth Edition changed the core set again, and only 211 cards had been in every core set.

You get the idea. Here's the complete breakdown:

That's right. In Magic 2011 there were only two cards that had appeared in every core set since Alpha. They're Giant Growth and Giant Spider.

This might be a good time to revisit a "Tales From the Pit" panel from Mark's column from Monday: 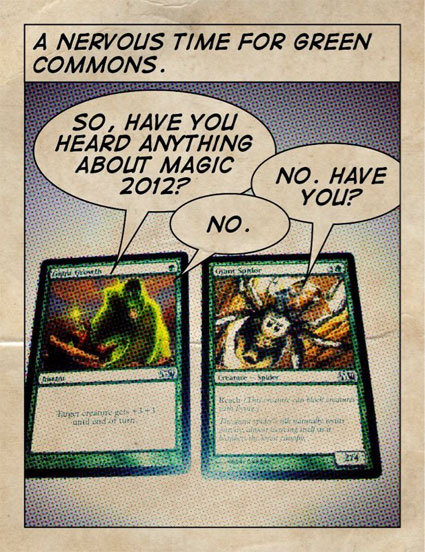 Well, guess what? Only one of these two cards is in Magic 2012. We're about to crown a winner in Core Set Survivor! So... to see the winner... of Core Set Survivor... please pause two minutes and watch some advertisements... and then come back here... congratulations... to the card... called Giant... !