he Dark Ascension Event Decks will go on sale on February 24. They're designed to be competitive at a Friday Night Magic event. They'll be available in English, French, German, Italian, Japanese, and Spanish. And here's what's in them! 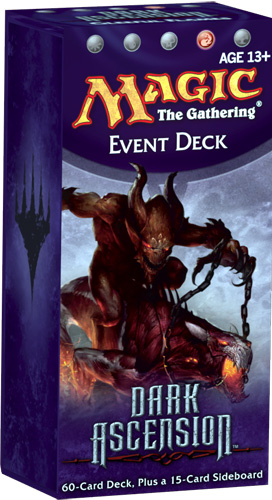 The "Gleeful Flames" deck has a single-minded focus: deal 20 damage to your opponents before they deal 20 to you. You have twelve spells that each deal 5 damage, and it only takes four of them to win the game.

Concentrate on reducing your opponent's life total, not on protecting your own. Your goal is to set yourself up to win when you draw your next explosive spell. Artillerize and Goblin Grenade require you to sacrifice a creature to cast them so be cautious about committing your creatures to combat. Don't block until you have enough mana to sacrifice your creature to an Artillerize before it dies or to cast a Brimstone Volley after combat. Your opponent's creatures will probably survive, but you'll be one step closer to winning.

The creatures in this deck aren't going to win the game on their own, but they do a great job of supporting your burn spells. Most of the creatures are Goblins that can be sacrificed to cast Goblin Grenade, the least expensive of your 5-damage spells. Goblin Arsonist and Goblin Fireslinger sneak in some extra damage to your opponent outside of combat. Forge Devil isn't a Goblin, but the 1 damage it deals to a creature when it enters the battlefield will often disrupt your opponent's game plan by taking down a Llanowar Elves or Birds of Paradise.

Of course, every 5 damage your creatures can deal to your opponent is another burn spell you don't have to draw. Be sure to attack whenever the way is clear. Equipping one of your creatures with Infiltration Lens and attacking with it is a win-win situation for you: If it isn't blocked, your opponent's life total gets smaller. If it is blocked, you draw two cards—and more cards means more damage-dealing spells!

Your sideboard lets you slow down your opponents, giving you more time to draw into your key cards. Bring in Dismember against decks with a few big creatures. You'll need to pay 4 life to cast it, but that's better than getting run over by a giant monster. Arc Trail and Gut Shot are great against fast decks that rely on small creatures. Into the Core is an obvious choice against decks trying to win with artifacts.

When you're ready to customize this deck, just add your favorite flavors of fiery destruction. If you want a more controlling deck, Chandra's Phoenix and Chandra, the Firebrand, both from the Magic 2012 core set, work well with all your burn spells. If you want even more burn spells, Incinerate and more Gut Shots are great options. If you want to send your creatures on the attack early on, you could try adding Stormblood Berserker and Porcelain Legionnaire.

1 Hellrider 4 Artillerize 3 Into the Core
53 Cards The "Spiraling Doom" deck is an extremely reactive deck: most of your decisions will depend on what your opponent is doing and how your opponent is trying to win the game. The key card in your deck is Birthing Pod, which lets you sacrifice a creature to go get a slightly more expensive creature out of your library. Once you have Birthing Pod on the battlefield, use it to find the perfect creature for every situation! If you need to kill a creature, look for Skinrender. If you need to deal with a powerful artifact, enchantment, or land, find your Acidic Slime and take it out.

If your opponent's deck relies on attacking you right away with small creatures, stay back on defense. Creatures like Young Wolf, Strangleroot Geist, and Viridian Emissary make perfect blockers. All of them give you added benefits if they trade with your opponent's creature in combat. Viridian Emissary replaces itself with a basic land, helping you to cast your more expensive spells like Myr Battlesphere and Bloodgift Demon earlier, and the other two come back to the battlefield stronger thanks to their undying abilities.

If your opponent decides to sit back and wait, you can often force the issue. Attack with Strangleroot Geist or Young Wolf when your opponent has several 1- or 2-toughness creatures. Blocking them won't be an attractive option. After combat, cast a Mortarpod and equip it to a creature. Then if you need a blocker, sacrifice that creature and it will return to the battlefield ready to block. If you have Skinrender instead, you can just kill your opponent's biggest creature and scare off the rest with the 3/3 blocker.

Because of Birthing Pod, your main deck includes at least one creature for most situations you can expect to face, but your sideboard lets you focus even more. Against opponents playing for the long game, Despise and Distress can prevent them from casting their best spells. Gravedigger and Myr Sire are more creatures that are good against aggressive opponents. Dismember can also buy a lot of time.

Birthing Pod is a flexible card that empowers a variety of strategies, but for the most part, it's all about creatures. If you want to customize your deck, look for creatures with "enters the battlefield" triggers and "dies" triggers. The Dark Ascension card Geralf's Messenger has both. Or you could look for creatures that punish specific decks. If you're facing lots of decks with artifacts, Oxidda Scrapmelter can be a valuable part of your Birthing Pod toolbox. If you're expecting lots of creature removal, Sheoldred, Whispering One is a great way to bring your creatures back from the grave.