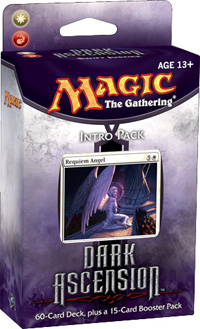 With the "Swift Justice" deck, your plan is to come roaring out of the gates, keep your opponent off balance, and end the game as quickly as possible.

Many of your creatures cost two mana or less. Elite Vanguard and Stromkirk Noble are both fantastic turn-one plays, and Bloodcrazed Neonate and Ashmouth Hound are follow-ups that are primed to attack. As long as some damage will get through to your opponent, it's usually correct to keep attacking, even if you'd lose one or two creatures in combat.

Flying creatures like Serra Angel and Requiem Angel will often end the game for you. An alternate finishing move is Rally the Peasants, a spell that gives all your creatures +2/+0. That bonus really adds up if you're attacking with multiple creatures—and if you use the spell's flashback ability to cast it a second time, it can be absolutely devastating!

If you'd like to alter the deck, consider adding Hellrider, which damages your opponent each time any of your creatures attacks. Innistrad cards that would make an impact are Mikaeus, the Lunarch, which can turn your horde of small creatures into a horde of large creatures, and Mentor of the Meek, which lets you draw an extra card each time you put a small creature onto the battlefield. 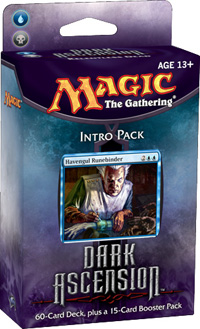 Embrace your inner necromancer with the "Relentless Dead" deck. Whether you prefer raising zombies out of fresh graves or stitching them together in your dank, dark lab, your mindless minions will soon conquer all who oppose you!

Start building your Zombie army right away by casting small creatures like Diregraf Ghoul and Walking Corpse. As the game progresses, your army will continue to grow. Spells with flashback like Reap the Seagraf and Moan of the Unhallowed give you multiple opportunities to create Zombie tokens. Don't be afraid to attack—even a dead Zombie has its uses. That's why cards such as Screeching Skaab, Forbidden Alchemy, and Cellar Door help you pile cards into your graveyard.

Having bodies in your graveyard means you can cast Corpse Lunge or return a Zombie to your hand with Ghoulraiser. More importantly, you'll be able to create some of your bigger Zombies, Makeshift Mauler and Skaab Goliath, that "recycle" the parts from dead creatures. Best of all, Havengul Runebinder can turn rotting, graveyard-entrenched creatures into fresh new (still rotting) Zombies and make your entire horde bigger! Whether you press the attack with hulking monstrosities or overwhelm your opponent with numbers, inevitability is on your side.

When it's time to customize the deck, there's no shortage of additional Zombie cards to choose from. The Magic 2012 set offers Cemetery Reaper and Grave Titan, both of which can make obscene amounts of Zombie tokens. The Innistrad set contains Rooftop Storm, which reduces the mana cost of your Zombies to

. And the Dark Ascension set has the jawdropping Zombie Apocalypse, which destroys all Humans and resurrects all your Zombies.

2 Reap the Seagraf 1 Moan of the Unhallowed 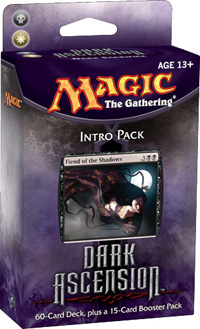 What Humans want to lay down their lives? Doomed Traveler, Elgaud Inquisitor, and Mausoleum Guard each create 1/1 Spirit creature tokens with flying when they die, and the same is true of any Human equipped with Avacyn's Collar. Alternately, Elder Cathar makes one of your other creatures bigger when it dies.

What cards put your creatures on the chopping block? Skirsdag Flayer lets you sacrifice a Human (or even itself, if necessary) to destroy a creature. Altar's Reap nets you fresh cards. Falkenrath Torturer gains flying and can grow bigger. Fiend of the Shadows regenerates. Demonmail Hauberk becomes equipped to a creature, which gives that creature +4/+2—a particularly good bonus on a 1/1 flying Spirit.

Once you get the hang of the deck, some options for customizing it include adding Ravenous Demon, which turns into a 9/9 creature with flying and trample if you feed it a Human, and Increasing Devotion, a way to get tons of delicious Human tokens. Vault of the Archangel and Sorin, Lord of Innistrad are also strong additions to any white-black creature deck. 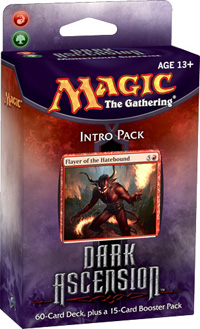 The scariest thing a monster can do is not stay dead. That's exactly how the creatures in the "Monstrous Surprise" deck behave. When any creature with the undying ability dies, if it didn't have a +1/+1 counter on it, it returns from the graveyard to the battlefield with a +1/+1 counter on it. If it dies now, it'll stay down . . . but how many extra lives can your opponent afford to deal with?

Start out the game by developing your mana base with Rampant Growth and casting small creatures like Young Wolf and Strangleroot Geist. Eventually you can make your creatures more formidable in combat with Greatsword or Wild Hunger. Use Fling, Prey Upon, and Skirsdag Cultist's ability to take down your opponent's creatures (or your opponent!). Overrun and Pyreheart Wolf let you make a final push on the battlefield to win the game.

Some fun cards you might enjoy adding to the deck include Vorapede, a beefy green creature with vigilance, trample, and undying, and Feed the Pack, which lets you sacrifice creatures to create a number of Wolf tokens equal to that creature's toughness. It's especially good when you get to sacrifice your undying creatures twice! The "Grave Power" deck harnesses the power of lost souls, refracting them into gigantic entities and overwhelming advantages. The dead may be gone, but they're definitely not forgotten.

The key to winning with this deck is to put as many creature cards into your graveyard as you can with cards like Deranged Assistant, Mulch, Tracker's Instincts, and Armored Skaab. You can also get creatures into your graveyard from the battlefield, of course, perhaps by sacrificing Dawntreader Elk or by engaging in combat with Ambush Viper.

The fatter your graveyard is, the more you'll reap the rewards. Imagine you have just six creature cards in your graveyard: Boneyard Wurm and Splinterfright are each 6/6 creatures, you can cast the mighty 10/10 Ghoultree for just

less than normal), Wreath of Geists gives the creature it's enchanting +6/+6, Grim Flowering would let you draw six cards, and Gnaw to the Bone would have you gain 12 life!

If you'd like to make the deck more consistent, you could simply add more Boneyard Wurms and Splinterfrights. The Magic 2012 card Jace, Memory Adept is another great way to fill up a graveyard, and the Innistrad card Kessig Cagebreakers is another great way to capitalize on a full graveyard since it creates a Wolf token for each creature card in your graveyard each time it attacks.

1 Gnaw to the Bone