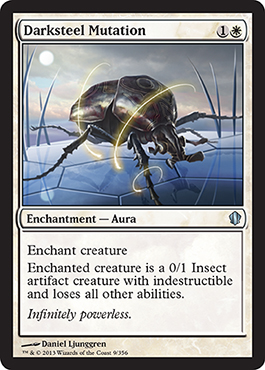 This little enchantment is sure to wrinkle some plans at Commander games. It is an exceedingly devilish piece of removal since it of course renders your Commander moot and unusable as anything but a blocker or an ineffective attacker.

There is an issue of housekeeping to go along with this spell. There is errata which, for many of you, will simply make the card do what you think it does. The official Oracle text for the card is:

Enchant creature
Enchanted creature is a 0/1 Insect artifact creature with indestructible and loses all other abilities, card types, and creature types.

The changes are bolded so that you can see them. So why the change? To explain the reasoning for this change I'll turn the keyboard over to Matt Tabak, the Magic Rules Manager. So, here you go, take it away Matt!

Any time we change a permanent’s types or subtypes (or supertypes, but that’s pretty uncommon), there are two ways to do it: either we overwrite the existing types or we add to them. If we’re overwriting, we just say “becomes a [whatever].” If we’re adding, we typically tack on “in addition to its other types.” So after being hit with Turn to Frog, the creature is just a Frog, not a Human Warrior or Beeble Ninja or whatever it was before. But there’s a little-known exception built into the rules for artifact creatures. If something becomes an artifact creature, by rule it also retains any previous types, subtypes, and supertypes. Darksteel Mutation, unlike similar spells that came before it, turns its victim into an artifact creature, and thus fell under this exception. Although the rules exception is important for other cards, few would likely guess that the target of Darksteel Mutation was still an enchantment creature, or perhaps more relevantly, still a Beast. So, we’re going with the slightly nonstandard template to be explicit about what this card is capable of. Fear not, though, the card is capable of quite a lot.

Thanks Matt! As I said, for the vast majority of players, this errata changes nothing about how they would have played the spell but we wanted to make you all aware of the change. Be watching for the Commander (2013 Edition) Release Notes next week!