Dictate of the Twin Gods

iblings can be a royal, or in this case, godly, pain in the butt. Am I right? I've got five siblings and they can drive me crazy. However, that being said–none of them are deities and none of them are part horse (or bull).

Iroas and Mogis are as different in appearance as they are in personality. In the launch promo you can get if you go to your local game store (while supplies last) you get an awesome look at the two twins having a bit of a disagreement. 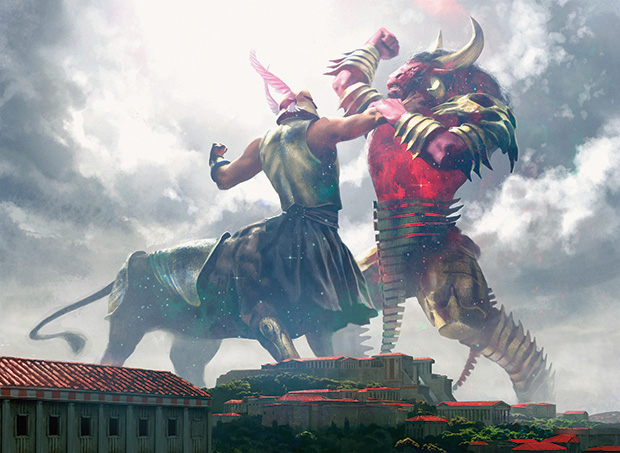 Dictate of the Twin Gods | Art by Chase Stone

Location: Daylit sky over Akros
Action: The two brother gods, IROAS and MOGIS are wrestling in the sky over the city over which they have the greatest influence. As gods they have the Nyx starfield effect.
Each god has a signature weapon (an axe for Mogis, a double spear for Iroas), but in this battle the weapons are sheathed or strapped to the gods' backs. This is a hand-to-hand combat, intended as a brotherly test of strength rather than a fight to the death. Star-infused, reddish power streams from them. Perhaps a battle is going on at ground level and the gods' power is enfolding it (the figures should be very small and indistinct if so--the focus is on the gods).
Focus: The wrestling gods. 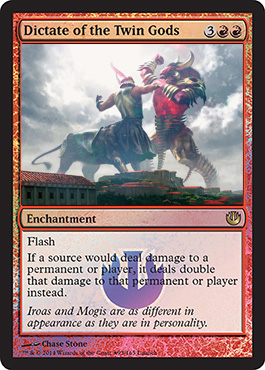 If you want to get this sweet premium promo, be sure to hit your local Friday Night Magic for the launch for Journey into Nyx! Play some Magic, hang out with your friends, and celebrate the launch of Magic's newest set!