ne of the really fun things about working on a game with such a deep and diverse history as Magic is diving into the lore. Some of us are more into this than others (*cough* Vorthos! *cough*), and some are so into it that we are asked to submit suggestions for flavor text, which actually gets printed! Like this one:

Mike McArtor, my editor, wrote the flavor text for that card. It's pretty good, if I do say so myself. It's not clear from the art, but Cymede (depicted in the art) is a devotee of Keranos. Here we see her receiving a vision from him that appears to be Mogis destroying a small town. We wouldn't really know who gave her that vision without the flavor. This symbiotic relationship of art and flavor text delivers a self-contained flavor package. Yummy!

I can't talk about this card without diving into that art. I adore Willian Murai's style. Some of my favorite pieces of Magic art are by Willian Murai. As the artist for Anax and Cymede, Willian got the chance to illustrate Cymede again here in Divination. Here's the art description and sketch.

Color: Blue spell
Location: A temple dedicated to Keranos.
Action: Show Cymede, the queen of Akros. She is a devotee of the god Keranos. Show her in an open air temple and has cast a spell of prophecy. Cymede is looking into the night sky and in the sky is a scene of Mogis about to destroy a tiny city.
Focus: The magical vision.
Mood: Arcane magic linked to the gods. 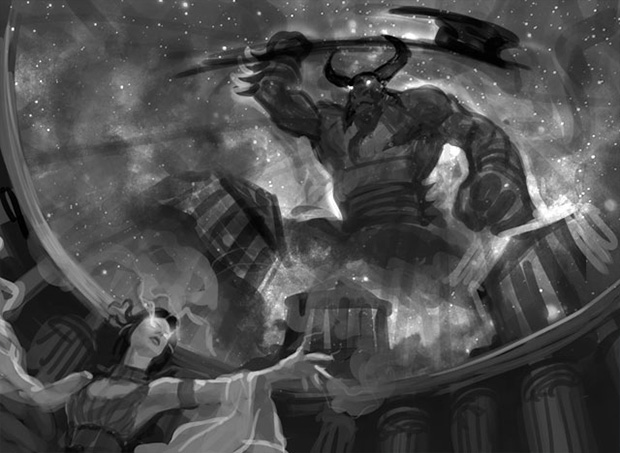 This is a great example of a painting’s composition and balance changing during creation. The sketch is great, but there are some balance issues. It feels like Mogis is swinging for Cymede, not the city. The white space to the left of Mogis feels odd as well. I get the concept, but I'm not sure where my eye should land because so many things are competing.

In the final, these problems are solved. Mogis has dramatically receded, yet been literally circled, drawing attention to him. The figure of Cymede has been tightened up and brought into crisp focus. The result is that your eye bounces between Cymede and Mogis. One of the defining factors of great art is that it is hard to look away, and this piece definitely achieves that.

I know I focus a bit too much on Willian, so here are a few other awesome artists for your consideration: