ith every new set members of R&D get to talk about the cards that almost were, or things that were tried on the way to the final product. A few weeks ago, Shawn Main dropped a few playtest cards from Theros on my desk. 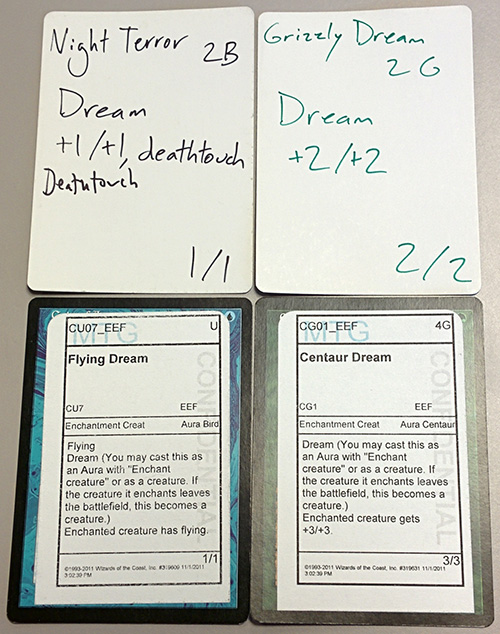 As you can see, the designs are fairly similar to what we know today: creature does this and what it enchants does the same. The major difference that you will notice is that development determined that bestow needed to be costed differently than the normal casting mode's cost.

So the question is obviously "What did these cards turn into?" All four of these cards came from the personal files of individual designers, which means in this incarnation they hadn't made it into the actual set's design files. For example, you'll notice the second row of cards has the phrase "EEF" which represents that they came from Ethan Fleischer's personal design file.

The first card is pretty easy to identify, it became Baleful Eidolon.

While you may be tempted to try and guess that Grizzly Dream turned into Boon Satyr, as far as I can tell that is incorrect. It looks like Grizzly Dream never made it into the initial design file.

When it became clear that Theros bestows were all going to modify power and toughness, it seems that Flying Dream is fairly easily morphed into Nimbus Naiad.

And, lastly, Centaur Dream would look to be the prototype of Nylea's Emissary.