ood news! Duels of the Planeswalkers 2012 is out today! You could go play it right now! Well, if you're reading this at 9:01 PM PDT, it's probably only available on Playstation® 3 so far, but by the time June 15 is in full swing, it will be available on Xbox LIVE® Arcade and PC via Steam® as well.

There are a lot of new features in Duels 2012 (as we sometimes call it when we're tired of typing "Duels of the Planeswalkers 2012"), but here's one that Magic players might be particularly interested in:

You can actually edit your deck.

Yes! Unlike Famous Original Duels, which restricted you to adding unlocked cards, Duels 2012 has a deck editor feature that lets you, when you add a card you like, take out a card you don't. As you can imagine, that gives you much more control over what you're playing. 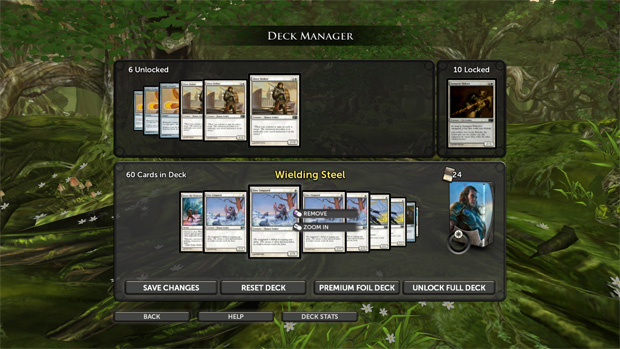 That's the Deck Manager, where you can do all the usual things like viewing unlockable cards and what cards you're removed from your deck. In the original Duels of the Planeswalkers, this is where you'd select a deck, but that doesn't happen here. Instead, you save your favorite configuration here and then choose a deck in the Deck Selector.

Other than basic lands, any card in a deck can be removed until the deck reaches the minimum size of 60 cards. So the more cards you unlock, the more control you have over your deck's precise contents! All decks have a minimum number of each basic land; additional lands are added based on the overall color breakdown of the deck, responding in real time to deck edits. 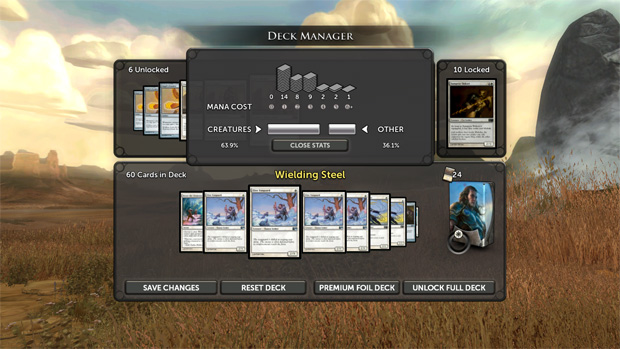 For more information about Duels of the Planeswalkers 2012, go to www.duelsoftheplaneswalkers.com.