Duels of the Planeswalkers: Garruk's Decklist

ast week, we used the official Magic group in the Wizards Community to show the packaging for the physical Duels of the Planeswalkers decks, which will be available in stores June 4.

Today, we're going to use Arcana to show you the decklist for one of them. Behold, Teeth of the Predator – the Garruk Wildspeaker Deck! 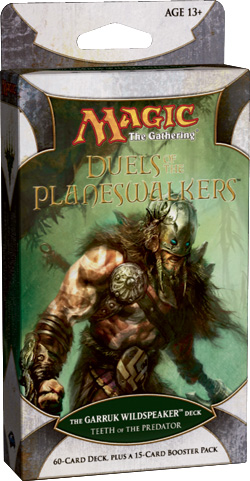 Teeth of the Predator– the Garruk Wildspeaker Deck

The other four will be revealed once a week in the Magic group. Be sure to join it so you don't miss a thing!