ool illustrations like the one on Figure of Destiny don't just happen, you know. Here's what Scott M. Fischer was given:

Location: None
Action: This is an abstract piece that depicts a kithkin whose spirit will go on to do great things once he dies. Show an ordinary male kithkin. Looming just above and behind him is his ghostly self, arms spread slightly. Just beyond that is his warrior-spirit self, stronger and more noble, and less "human" -- less distinct facial features -- wielding a sword. Beyond the warrior-spirit self is the Avatar self, a majestic spirit that is grander and more ethereal/abstract than all the rest, wielding a grand ghost-sword. maybe the forms roil in and out of each other...not just stacked figures.
Focus: The creature starts as an ordinary kithkin, so that should be the most distinct. Mood: Evolving into ghostly greatness
Notes: Four silhouettes, one in front of the other, ranging in "grandiosity" from a simple kithkin to a great ghost-avatar.

Now, let's work through the process. 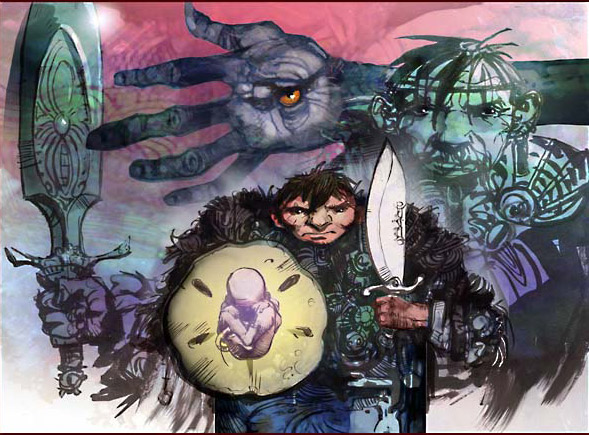 Here's the first sketch. It's interesting, but the creative team wanted to see the giant ghost avatar in there somewhere to contrast with the regular-sized kithkin. Scott made a few changes, and handed in a second sketch incorporating the changes. 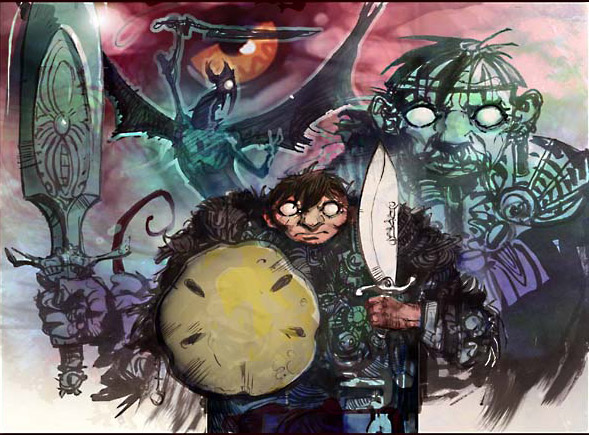 For the second sketch, Scott replaced the eyeballs of the Kithkin (because these are Kithkin are from Shadowmoor, not Lorwyn) and added a giant flying avatar in the background. It's closer to what the creative team had in mind, but the background image looks more like a dragon than a ghost. A few changes were still required. 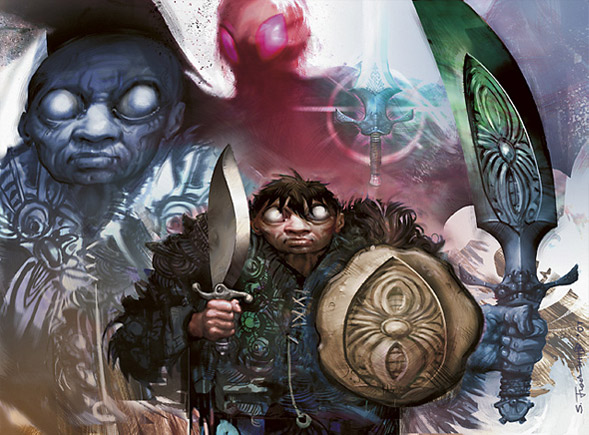 In the final version, you've got all three versions of the Figure, and each of them is holding a sword. As the figures fade into the background, they get more ghostlike and also bigger and more powerful. And that's how the card got made!