Black is my favorite color in Magic, and although I'm not a big fan of Zombies, I do like the Returned of Theros. Those gold masks look really cool, and the Returned have a sort of melancholy about them that Kelly Digges explored in his story, "Asphodel." Trick has looked at the Returned a couple times (in "Intrusion" and "The Returned") so let's do it again, this time with one from Theros and one from Born of the Gods!

"Gary" (as it's affectionately known) is popular in both Limited and Standard, so it seemed like a good place to start. It's a little hard to see at card size, but there is a trail of gold coins dropping out of the gray merchant's bag, as instructed in the art direction:

Maybe a sack has fallen off his back and split open, and coins spill out onto the ground. A trail of lost coins, which has fallen out of one of his sacks, can be seen on the road behind him. 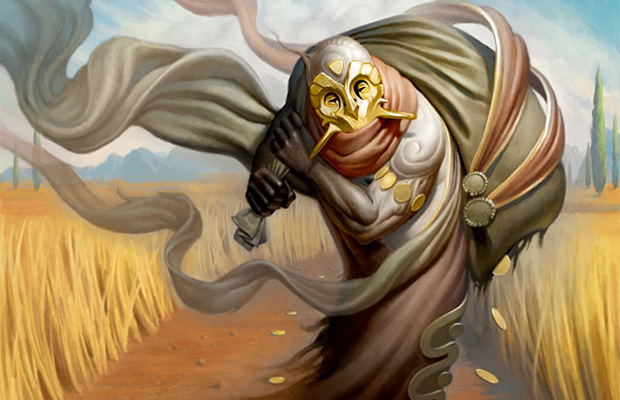 Moving on to Born of the Gods, let's start with the art description:

Action: Deep within a cavern lit from some unknown source show a female Returned. She is a "pseudamma"—a Returned who steals the children of the living, eventually turning them into Returned as well.
She is with two children, one holding each hand. They are roughly 4 to 6 years of age. The pseudamma has a signature golden mask of the Returned, but the two children forms don't have a golden mask yet—they are still living, but faceless.
She should feel disconnected from the children and they from her, they simply blindly shamble where she leads. 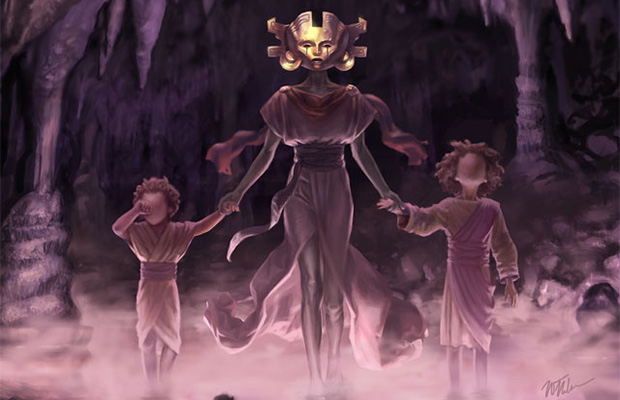 And, yes, there's a story that talks a bit about the pseudamma as well: Jennifer Clarke Wilkes's "Dance of the Flitterstep." Enjoy!