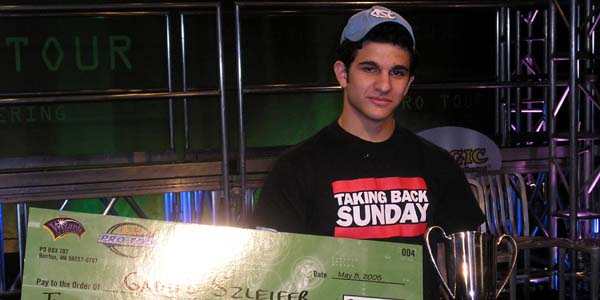 After a season and a half without an American winner on the Pro Tour, Gadiel Szleifer has etched his name into Magic history by winning Pro Tour-Philadelphia.

Playing a deck leveraging the powers of Gifts Ungiven, the 16-year-old Illinois native defeated fellow teenager Kenji Tsumura of Japan three games to two in the finals. Tsumura had a 2-1 lead going into the fourth game, but Szleifer fought off elimination to win his first Pro Tour.

For his efforts this weekend, Szleifer won $21,275 in prize money. But perhaps more importantly, his victory elevated him to Level 5 status in the new Pro Players Club. That means for the rest of this year and all of next season, he'll earn $1,500 for every Pro Tour he attends -- as well as having Wizards pick up his airfare costs for all of those trips.

Not a bad birthday present for Gadiel, who turned 16 and picked up his driver's license a mere week ago.