timeshifted card Brute Force poses the question, "What if red had temporary creature enhancement?" Like all the set's timeshifted cards, it takes some squinting to see Giant Growth as a red effect, but it's not so far off given cards like Enrage, Fists of the Anvil, Barreling Attack, Chaotic Strike -- or just plain Firebreathing. The fact that Brute Force grants a significant amount of toughness is odd for red, but that's where the squinting comes in.

You may have thought the art of Brute Force was of a giant expressing his rage, spiked-club style, on the towers of a castle. He is a giant-sized brute, but that's actually just the effect of the spell. 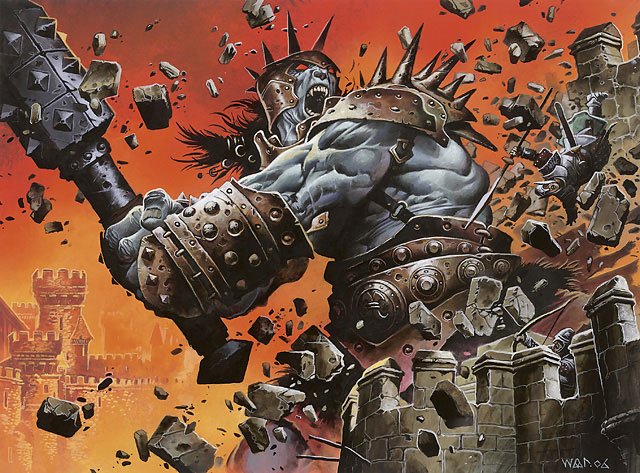 The figure in Wayne Reynolds's art is actually a Keldon, a member of a grey-skinned race of savage Dominarian warriors. Keldons are technically human; this guy was originally closer to the size of the unfortunates he's knocking clean out of their protective tower. But their rage... well, let's just say the warrior in the picture didn't need his temper to get +3/+3.

You can see other Keldons depicted in the Time Spiral Block on cards like Keldon Halberdier, Keldon Marauders, Radha, Heir to Keld (she's half-Keldon), and on a Future Sight card.