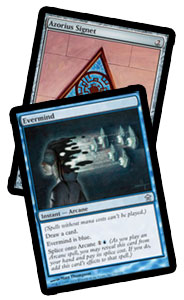 s the Comprehensive Rules remind us, a card's color is identified by its mana cost, not by what its frame looks like.

203.2. An object is the color or colors of the mana symbols in its mana cost, regardless of the color of its frame.

203.2a Objects with no colored mana symbols in their mana costs are colorless.

So logically, an artifact, as a card that has no colored mana symbols, should be colorless.

But then there's that old Golden Rule:

103.1. Whenever a card's text directly contradicts these rules, the card takes precedence. The card overrides only the rule that applies to that specific situation. The only exception is that a player can concede the game at any time (see rule 102.3a).

Which helps explain what's going on in this Dissension card:

Yep, it's an artifact. And yep, it has a gold (i.e. multicolor) frame. Transguild Courier's rules text, rather than its mana cost, has taken precedence in determining the frame color. This is similar to Evermind, a card that has no mana cost but bears the phrase "Evermind is blue" in its rules text. The frame of a Magic card is just a reminder, not the actual determiner of the card's color.

But thanks to that funky line in Transguild Courier's rules text, it interacts well with cards like Blessing of the Nephilim, Might of the Nephilim, Bound // Determined, Coalition Victory, Spirit of Resistance, All Suns' Dawn and Meteor Crater (look 'em up!).

Then again, it's vulnerable to Red Elemental Blast, Western Paladin, Lifeforce, Lawbringer, and King Crab, along with just about every other color hoser in the game. So, benefit or drawback? Depends on the game!

Note that, in John Avon's art, the Transguild Courier is constructed of gold-colored metals, and even has small gems along its belt to indicate its multiple-color allegiance.