The Growth of a Giant (Growth)

in Alpha, Giant Growth was simple: See this rat? It's enormous! Look at those tiny bones next to it!

Things stayed that way until Ice Age, when the spotlight was taken by a dragonfly:

That wasn't entirely satisfactory, because there wasn't anything to provide scale. Sure, the dragonfly might be huge, but it also might be . . . the size of a dragonfly. For Fifth Edition, the creature of choice was once more a rat:

This time, the rat isn't just lurking in the sewers; it's out there menacing small dragony-looking things.

In Seventh Edition, the small creatures took a back seat to a good old-fashioned ENORMOUS HUMAN WARRIOR. This time, the art actually showed the moment of transformation, with the puny human (in front) turning into the big one.

Possibly the most popular version arrived in 2006 as a textless Magic Player Rewards card: 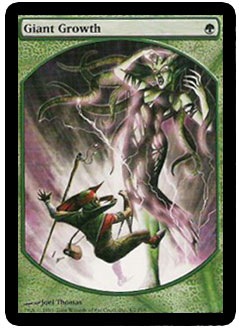 Finally (for now) the Tenth Edition Giant Growth shows a wee Grizzly Bears turning into a massive force to be reckoned with.