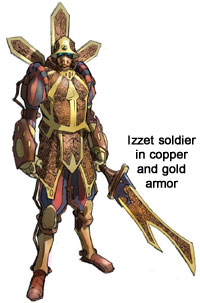 ith Blue's creativity fueled by Red's passion, the Izzet guild powers Ravnica's infrastructure while advancing its frontiers of utterly insan-- er, inspired -- magical innovation. Today we take a peek at the Guildpact style guide to see how the look and feel of this simultaneously scattered and sublime guild came together.

A style guide is a document of text and reference illustrations used to guide artists who work on a Magic set. The concept illustrations shown in this Arcana are all by Guildpact's lead conceptual artist, D. Alexander Gregory.

As you can see below, the wizards of the Izzet guild dress in flamboyant and alchemically-boosted clothing. This guild is funded by a dragon's hoard, after all -- a dragon who has lived for thousands of years. Think of the compound interest! You can see examples of Izzet wizards on cards like Izzet Guildmage, Izzet Chronarch, Stitch in Time and Tibor and Lumia. 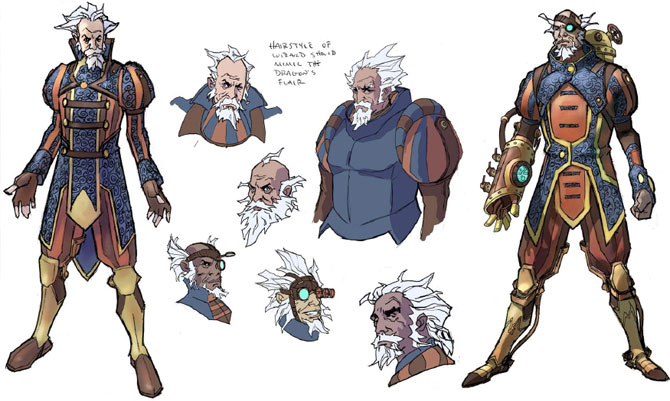 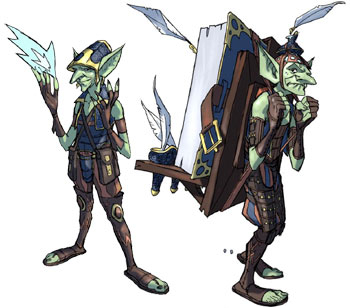 The Izzet employ more than one kind of assistant in their mad experimentation. There are the weirds, walking fusions of opposing elements originally invented by Niv-Mizzet, the Firemind himself. And then there are the wizard wannabes, the Izzet goblins. Check out these two diminutive apprentices (right) doing gruntwork for some Izzet mage. Note the art of Frazzle, Mimeofacture and of course Goblin Flectomancer to see more examples of Izzet goblins based on these fellows.

You don't get to see much of Izzet soldiers, but they exist, defending Izzet interests in the Tenth District and beyond. One design, clad in copper and gold armor, is shown above. Below you can see some designs for Izzet weaponry -- note the frequency of copper, a heat-conductive and alchemically-important metal. You can see Izzet soldiers in action in the art of Leap of Flame. 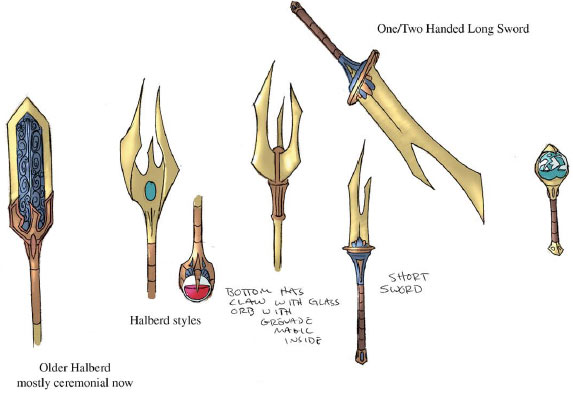 Interestingly, many of the weapons held high in the art of Sword of the Paruns were clearly inspired by these Izzet weapon designs.