Tomorrow, October 20, is the official, on-the-nose anniversary of Mark Rosewater starting at Wizards of the Coast. We'll be celebrating in our own ways, but you should feel free to wish him a happy 20 years by email or through any of his social media accounts (Twitter, Tumblr, Google+, and Instagram).

But in the meantime, we wanted to create a small tribute to Mark and the mountains of work (and work on Mountains) he's contributed to Wizards of the Coast and Magic: The Gathering over the past 20 years. So below you'll find a few stories and tributes to Mark from some of the people who know him best. 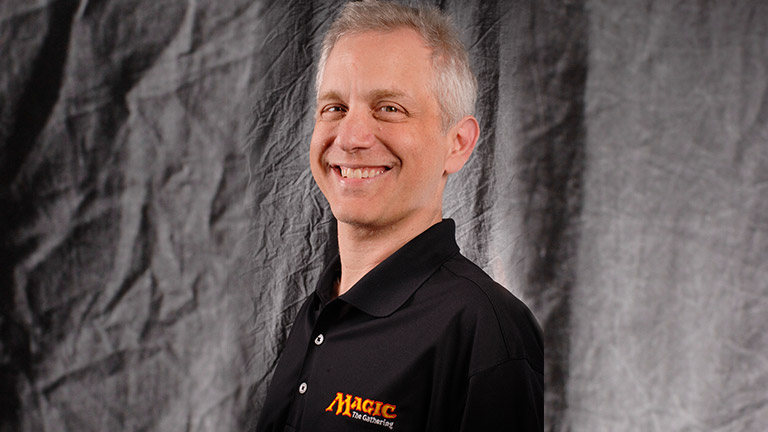 Mark's first words to me were "Hello, can I use your computer?" When Mark joined Wizards, Wizards was in the process of moving to a new building. Mark spent his first month desk-less, wandering around asking everyone when they would be attending a meeting and whether he could borrow their computer. Frequently I would come back to my desk to find Mark typing superfast, with his two-finger approach to typing, attempting to finish his article before his computer time expired. Wizards moved; Mark received his own desk and computer; Magic flourished.

When I think about all the great design Mark has completed for Magic, split cards may be his greatest accomplishment. Not for the design, however. While those are great, Mark has many other design innovations for Magic. Split cards are his greatest design accomplishment because when he introduced them, everyone hated them. Other Magic designers hated them. The Magic developers hated them. The Magic brand team hated them. Why? I couldn't tell you. I was one of the few who loved split cards at first sight. The Magic team played with the concept and recognized how fun they were to play, and split cards made it into Invasion. The funny part of the split cards story is that in the years after Invasion was published, nearly everyone at Wizards said how much they loved split cards from the beginning. All Mark could say was "I wonder who I was fighting with."

I first started working in R&D in the fall of '96. Excluding a short break, I have been working "in the pit" for most of the past couple decades. Prior to that, I did a little bit of game playtesting/development for friends. So I have seen a lot of great game designers come and go.

The entire time I have been working here, Mark has also been here. In my mind, most designers, including the great designers, have a defining characteristic. One designer might be described as "inquisitive," another might be "methodical." Thinking about how Mark was back when I first met him almost nineteen years ago and how he is now, the characteristic that I would attribute to Mark is "passionate." Mark was very enthusiastic and excited about game design in general, and Magic in particular, when I first met him, and still to this day brings a level of energy and a drive to make the game better that few match and none exceed. Period.

It has been a pleasure and a privilege to work with Mark over the years. He truly has made a positive impact on Magic! I am truly glad that we (and by "we," I don't just mean Wizards—I mean the people who love the game) have people like him defending, protecting, and improving the game of Magic.

Mark is a machine, and knows more about Magic than most people will ever have the chance to forget. It's appropriate that my story about Mark also involves the number 20. . . . I could talk here about Mark's constant outreach to the community, and his awareness of not just what's going on in it but also what they care about. After all, it was that sort of community outreach that got me my first job at Wizards: Mark used to attend all the Pro Tours, and he would seek out top players just to talk with them and understand their perspectives on the game. After a few of those chats with me, Mark told me I should apply for a job in R&D. I often think of winning a Pro Tour as one of the days where the rest of my life changed, but Mark telling me to apply for that job probably had at least as big of an impact.

(He really does read all his emails, too.)

But what I really want to talk about here is something that I don't think Mark gets enough credit for: He's a gamer, too. He may not be "Spike," but he's such a creative Johnny that he had us celebrating his work anniversary on the wrong day. You see, when Mark got his job offer to work at Wizards, he did the right thing and negotiated a little bit to see what extra benefits he could get thrown in with the offer. One of the things he asked for was that his start date be back-dated so that, among other things, he would start accruing vacation earlier (and get to a higher accrual rate sooner).

Happy (almost) anniversary, Mark! The game is a far, far better place because you're it in.