e've seen before how Mark Rosewater carries with him a piece of well-worn paper to jot down Magic card ideas. One of these ideas was "Helm of Volrath," the card that eventually became Mirrodin's Mindslaver. 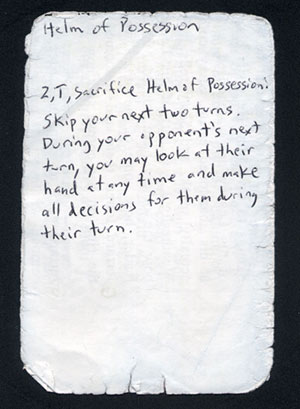 In this scan you can see that he titled the card "Helm of Possession" in his notes; it was to become a splashy "marquee" card for Tempest. Instead the name Helm of Possession, and the concept of a powerful helm belonging to Volrath, became attached to this creature-stealing artifact:

The basic turn-stealing mechanic eventually wound up on Mindslaver. Interestingly, as you can see from its art, Mindslaver was still concepted as a mind-control helmet.