A History of the Beeble

et's talk about Beebles! You are, of course, familiar with the adorable little guys that appeared in Urza's Legacy's Bouncing Beebles and Urza's Destiny's Bubbling Beebles:

Ah, but do you know where they came from? The answer might surprise you, so let's take a trip all the way back to February 1998 and the cover of Duelist #22. 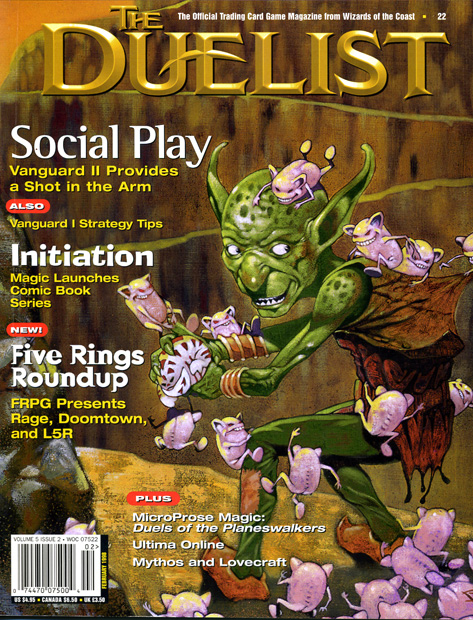 The goblin here is Squee (you can see Squee's Toy in his hands) and artist Jeff Miracola gave him a bunch of little friends. When Exodus came around, Jeff got a couple of cards that let him bring them in again:

Art description: This spell allows you to unsummon one of your opponent’s creatures each time you summon one of your own. Represent this with scales, each overflowing with little critters. One is filling up while the other empties, and the scales are pulled into alignment. 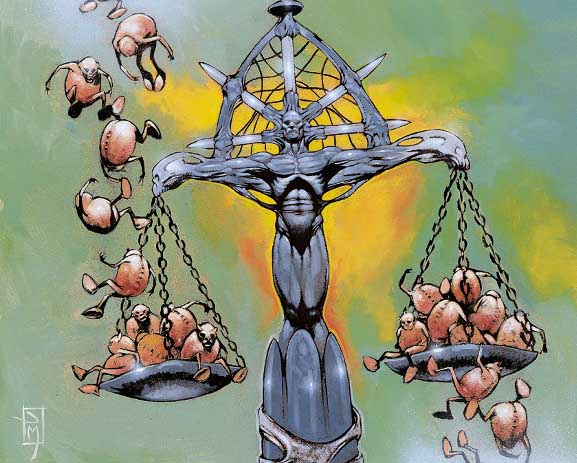 Art description: Probably a good comedy piece. Maybe show a group of horrific creatures looking queasy because an unbearably cute thing has entered their presence. Or perhaps a group of Skyshroud elves has entered a Mogg warren and have stumbled upon (but preferably not into) the latrine! 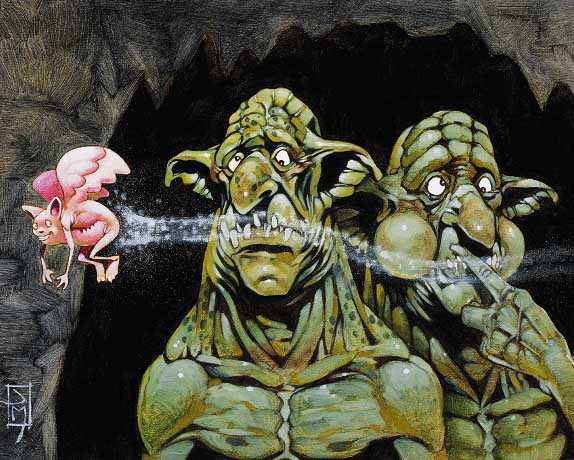 This established them in people's minds, but when they appeared again in Urza's Saga, they still didn't have a name!

Art description: An academy tutor stands in front of a blackboard filled with unrecognizable symbols and words. The only recognizable markings appear to be a diagram of a wizard summoning a creature and it is this that the tutor indicates to. In his other hand, outstretched to the viewer (who’s POV is that of a student) the tutor summons a single small creature. It might be nice to have Jeff Miracola do this piece and for the little creature to be one of his now famous pink critters! 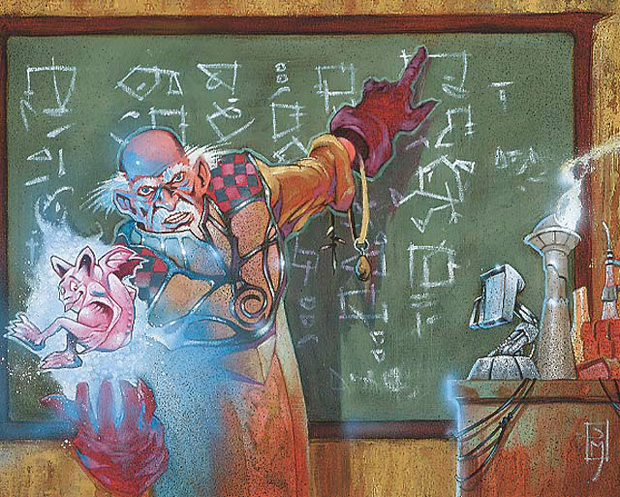 This was enough to establish the mysterious pink creatures in people's minds, so when Urza's Legacy came around, they got given a name and a creature type.

By the way, the room the beebles are invading is in the Tolarian Academy (they presumably escaped from the Wizard Mentor's classroom) and is full of important artifacts like the Null Rod, the Thran Tome, a Powerstone, and so on. 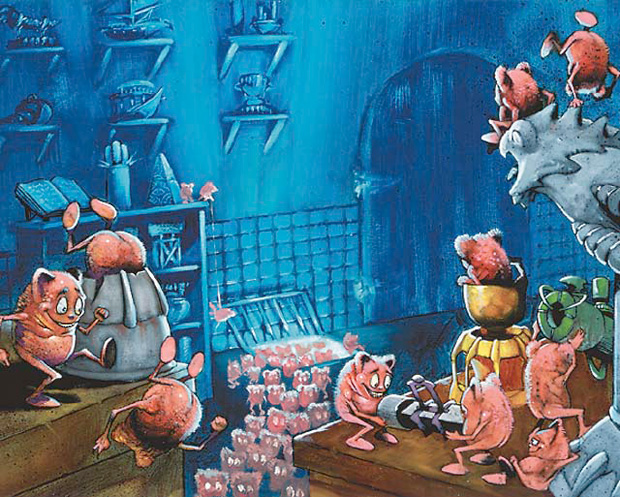 When Urza's Destiny came along, the Beebles appeared again, although they were a slightly different color to indicate that they were cousins to the original breed. 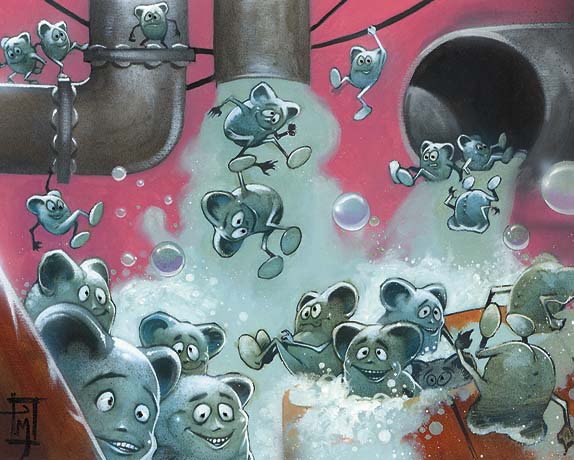 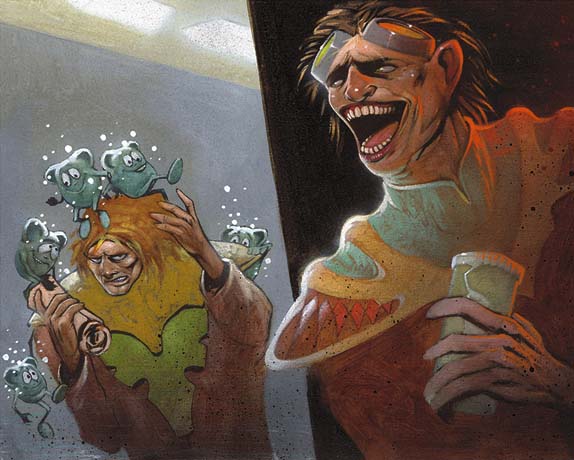 That was it for the beebles in the main set, but they made three appearances in Unhinged. 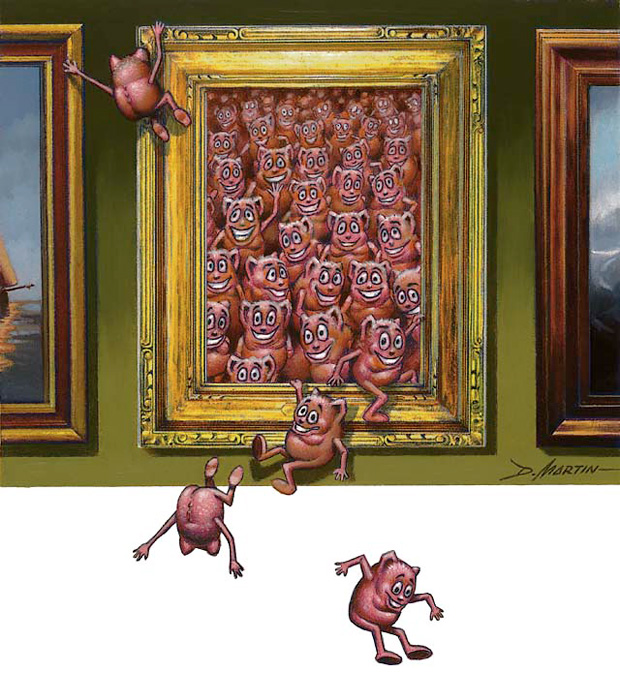 Then they appeared (upside down!) in Topsy Turvt. 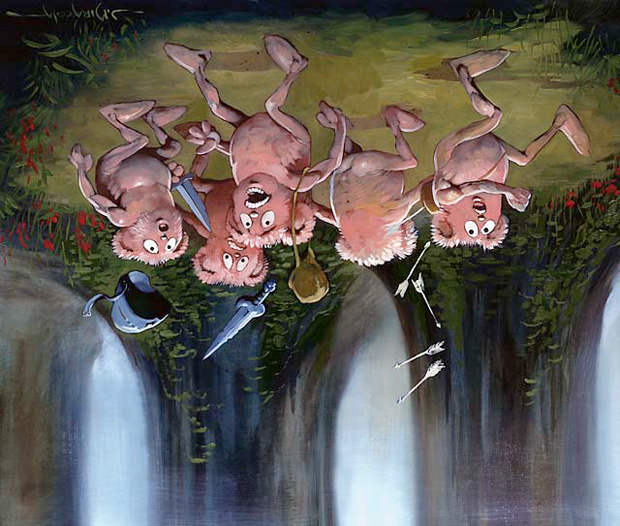 Finally, they received a delicious send-off in Sauté

Art Description: Location: a kitchen, or maybe the set of a TV cooking show
Action: A gigantic, monstrous hand, maybe that of a Krosan Cloudscraper, for example, stirs a wooden spoon in a huge skillet or wok. Inside the pan, hundreds of little beebles are getting sauteed. The beebles look anywhere from panicked to (comically) dead (little flailing arms, Xs instead of eyes to show the dead ones, etc.). 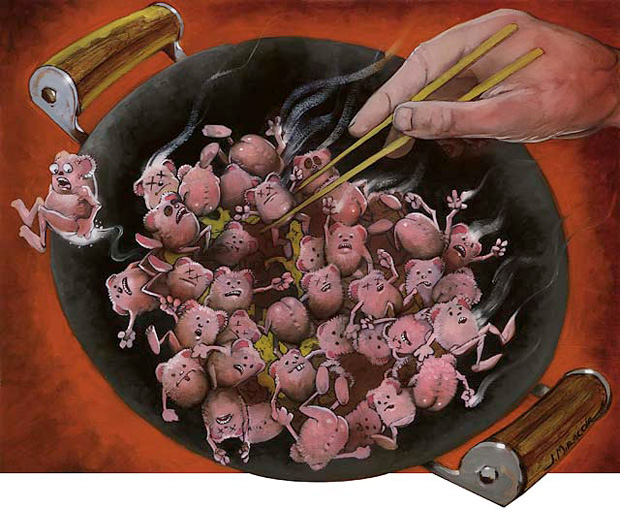