The History of the Color Pie

ou're familiar with the color pie, right? That's the thing that assigns what each color of Magic is good at, as well as where the mana comes from.

The current definition of each color's strengths is found in the Magic 2011 Player's Guide, where it looks like this: 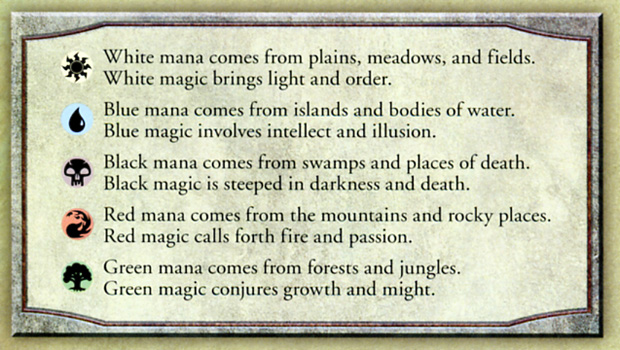 Now, perhaps you're wondering how it's changed since the earliest days of Magic. Well, good news! A few years ago, we transcribed the Alpha rulebook, so we can see how they were originally defined!

Black Magic: The black magician's power stems from the swamps and bogs. Black magic is the magic of death. The often self destructive lore of black magic is regarded by most as best left unknown. The traditional enemies of black are white and green.

Blue Magic: The blue magician taps the islands for energy. Blue magic is mental in nature. The fortes of the blue magician are artifice, illusion, and deception, as well as the elemental forces of air and water. The traditional enemies of blue are red and green.

Green Magic: The green magician draws energy from the forest. Many magicians have been lulled into complacency by green magic's peaceful exterior, the magic of life, and have been caught unaware by the vast destructive capability of its nature. Green's traditional enemies are blue and black.

Red Magic: The red magician gets power from the mountains. Red magic is a destructive magic, the magic of earth and of fire, of chaos and of war. The traditional enemies of red are blue and white.

White Magic: The white magician draws energy from the plains. Spells of healing and protection are the white magician's specialty, though chivalrous war magic is not unfamiliar. White's traditional enemies are red and black..

So now you know!