hen you go to the Avacyn Restored Prerelease this weekend (April 28-29, 2012), you won't be able to buy the Intro Packs yet. They go on sale along with the rest of the set on May 4. The MSRP is $12.99 for these sixty-card decks, which are designed to introduce beginning players to the new set. Each one comes with a booster pack of Avacyn Restored. And here's what's in them! 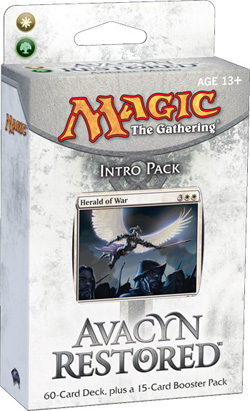 The "Angelic Might" deck features, as you'd expect, gigantic flying creatures with awesome abilities. You just need to make sure the game lasts long enough for them to come out! Hold off your opponent's creatures with Angelic Wall and Gideon's Lawkeeper, neuter those creatures with Defang, and take them off the battlefield entirely with Righteous Blow and Oblivion Ring. Don't be afraid to trade your creatures in combat for your opponent's attackers—anything that slows down your enemies is good for you.

Meanwhile, develop your mana base with Rampant Growth and Borderland Ranger, and prolong the game by gaining life. Cathedral Sanctifier can help with that as early as turn 1. Seraph of Dawn's lifelink ability lets you gain life each time it deals damage. Add in the lifegain potential of Scroll of Avacyn, Seraph's Sanctuary, and Goldnight Redeemer, and you can counteract a lot of damage you may have taken.

Once the Angels arrive, the battle plan becomes simple: attack! Serra Angel and Archangel play both offense and defense thanks to the vigilance ability. Voice of the Provinces comes with a friend that can block a counterattack. And Angel of Glory's Rise can resurrect all the Humans that gave their lives for the cause earlier in the game.

Once you've played the deck, you may wish to diversify your collection of Angels. Luckily, the Avacyn Restored set has plenty of amazing choices! Angel of Jubilation; Restoration Angel; and Sigarda, Host of Herons are all stunning. But nothing holds a candle to Avacyn, Angel of Hope, an indestructible 8/8 Angel that makes all your other permanents indestructible too!

1 Goldnight Redeemer 1 Voice of the Provinces 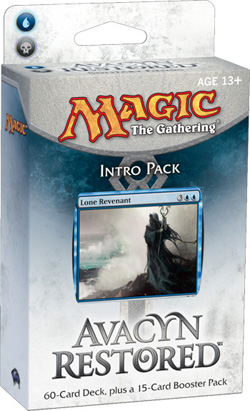 With the "Solitary Fiends" deck, your nefarious scheme is to have exactly one creature on the battlefield. Your most powerful threats thrive if you meet this condition. For example, Demonic Rising supplies you with a 5/5 flying Demon, and Lone Revenant provides you with extra cards. Other creatures such as Fettergeist and Havengul Skaab are at their best when by themselves, and provide an easy way to ditch your other creatures.

Playing with just one creature can be risky since you leave yourself open to counterattacks, but the deck has a number of ways to fend off your opponent. Frost Breath and Crippling Chill lock down opposing creatures. Into the Void and Peel from Reality return creatures to their owners' hands. (This is also helpful for getting you down to a single creature!) Alchemist's Apprentice and Crypt Creeper are especially useful minions—not only can they block potentially painful attacks, but they can sacrifice themselves at a moment's notice when you'd benefit by having just a single creature.

If you're interested in customizing this deck, try adding Descend into Madness, an enchantment that will devastate your opponent's side of the board while supporting your solitary strategy. Another strong choice is Tamiyo, the Moon Sage, a Planeswalker who can distract your opponent's creatures and refill your hand with cards.

2 Essence Harvest 2 Into the Void 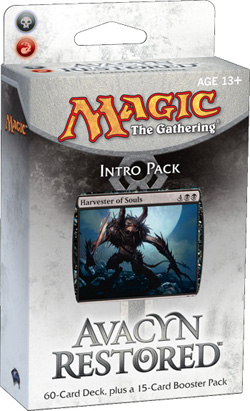 The key to playing the "Slaughterhouse" deck is to kill creatures early and often. The twisted part is that you'll want to kill not only your opponent's creatures but your own, too! Many of the creatures in this deck don't stay dead, so offing them isn't really a disadvantage. The first time they die, creatures with the undying ability return to the battlefield even bigger than before!

You've also got plenty of creatures that give you a bonus when they die: Goblin Arsonist and Gang of Devils deal damage, Maalfeld Twins replaces itself with a couple of Zombies, Driver of the Dead raises a creature from the dead.... As if that weren't enough, cards like Harvester of Souls, Blood Artist, and Havengul Vampire provide bonuses when any creature dies, no matter whose it was.

Ultimately, you'll have such complete mastery over death that sacrificing your own creatures will be a benefit in disguise. Barter in Blood, Bone Splinters, and Fling are all cards that allow you to kill your opponent's creatures at the cost of killing your own. This may seem fair, but while your opponent's creature stays dead, your Butcher Ghoul comes back from the grave and Harvester of Souls nets you multiple cards. Now that's truly evil.

To make this deck even more diabolical, consider bolstering it with Killing Wave, a black sorcery with the potential to kill all creatures or shred your opponent's life total. Hound of Griselbrand is another nasty choice, as it has both undying and double strike. Finally, Vexing Devil gives your opponent the choice of facing down a 4-power creature or taking 4 damage—all for just one mana! 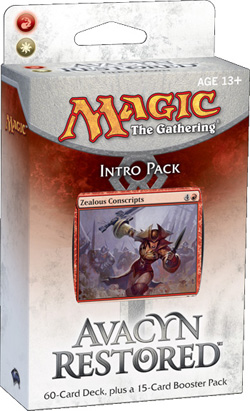 The "Fiery Dawn" deck focuses on the power of Humans working together. Since this is an aggressive deck, your primary focus will be to cast creatures and start attacking with them as early as possible.

Many of your cards provide bonuses whenever another creature shows up on your side. Some bonuses, such as those provided by Kessig Malcontents and Vigilante Justice, deal damage to take out potential blockers so you can attack with ease or shorten the game by taking a chunk out of your opponent's life total. Kruin Striker temporarily makes itself bigger, while Goldnight Commander temporarily makes your entire army bigger. Cathars' Crusade is an enchantment that goes one step beyond that: it makes your entire army bigger permanently!

Perhaps the most dynamic card in the deck is Thatcher Revolt. Since it puts three Human tokens onto the battlefield, it can cause your other cards' abilities to trigger three times at once! Of course, it also provides a small army of creatures raring to charge at your opponent. Add in Zealous Conscripts, which recruits one of your opponent's creatures to fight on your side for a turn, and a few damage-dealing spells like Incinerate and Pillar of Flame, and justice will come swiftly indeed.

If you'd like to jack up the damage-dealing potential of this deck, Burn at the Stake and Bonfire of the Damned are both ferocious ways to end the game in a torrent of fire. If, instead, you'd like to increase the number of powerful Humans in the deck, the Innistrad card Champion of the Parish is one of the fiercest fighters you could add. 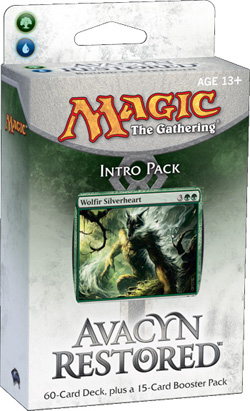 If you like teamwork (and overwhelming your opponent), you'll love the "Bound by Strength" deck. The soulbond ability lets pairs of creatures share their powers—but soulbond creatures get the benefit of their abilities only if they're paired with another creature, so it's important to put plenty of them out!

In some cases, pairing two soulbond creatures together is the best play. Sometimes different choices can pay off. If you pair Tandem Lookout and Latch Seeker, Latch Seeker becomes an unblockable creature that lets you draw a card whenever it deals damage to an opponent! And pairing anything to Flowering Lumberknot is a good idea, since this four-mana 5/5 can attack or block only while paired.

Naturally, the deck also has a few tricks in store. Joint Assault gives +2/+2 to any creature, whether it's paired or not—and if it is, the other creature gets the bonus too! Wolfir Avenger's flash ability lets you create a pair when your opponent's not expecting it. Both Nephalia Smuggler and Deadeye Navigator let you exile a creature and immediately return it to the battlefield, which can let it dodge a removal spell or set up a new soulbond pair. And if all else fails, a timely Overrun can quickly end the game in your favor.

If you'd like to personalize the deck, the first move is probably to add in more Wolfir Silverhearts. Other good options include Soul of the Harvest, a 6/6 creature, which lets you draw a card each time you put a creature onto the battlefield, and Descendants' Path, which could net you a free creature each turn.