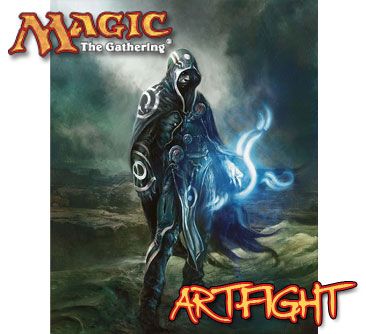 We're pleased to announce the launch of ArtFight, a Facebook application that lets you settle the age-old questions: Which art is cooler, Reya Dawnbringer or Lavaborn Muse? Benalish Knight or Counsel of the Soratami?

ArtFight lets you pick between two random pieces of Magic art, choosing which one you think is cooler. Then, periodically, you'll get a bonus round where you'll be asked "Which of these two images has been rated higher by others?" The better you do, the more you'll score. You can compare your scores with your friends' in overall XP, longest streak of right answers to bonus questions, and average streak of right answers to bonus questions.

UPDATE: ArtFight is experiencing some post-launch jitters. If you have any trouble with it, check back later in the day.