ntroducing the fifth new commander from Commander (2013 Edition), Marath! We will begin the week of previews for the set next week but we wanted to introduce you to five of the new commanders from the set. 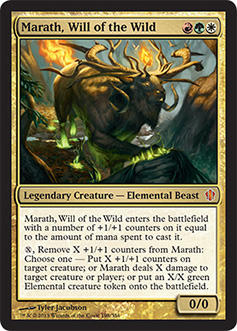 Before you start dreaming of your Commander decks of tomorrow, we do have to note that Marath will be receiving errata upon release. The text "X can't be 0" was inadvertently left off the card.

So the new Oracle text is:

Marath, Will of the Wild enters the battlefield with a number of +1/+1 counters on it equal to the amount of mana spent to cast it.

Yesterday, we revealed two of the other commanders in the set. One via our friend Chris Kluwe, who came by the offices and got a chance to play with the decks a few weeks ago, and the other via the MTGCommander.net website, the official rules source for the Commander format.

Going further back you might recall we revealed two commanders even earlier at San Diego Comic-Con and PAX Australia.

These five commanders are the "face cards" in our Commander (2013 Edition) packaging. We'll show you all five boxes tomorrow!