oets refer to the eyes as the window to the soul, which, while evocative isn't always true. In Magic there are a number of ways to access the soul (unless we are talking about someone who is soulless).

But what about the mind? There's lots of ways to get in someone's mind, whether it is the direct way, such as a faerie extracting from a sleeping human's temple, or going old school and cracking open the skull for direct access to the source. But sometimes you don't want to go over the top, you just want to come in through the front door. What if you don't have a face, such as the Returned from Theros?

Check out Psychic Intrusion and see another strategy when it comes to accessing a mind and its thoughts... 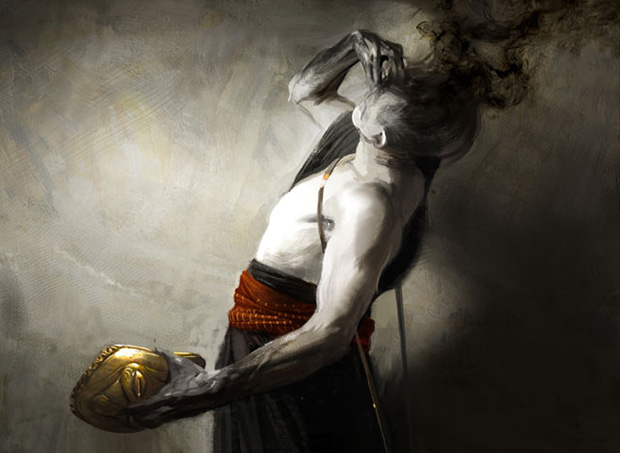 Action: This spell represents stealing someone’s thoughts. He has removed his gold mask to reveal a missing face. With one hand, he reaches into his own head. There’s nothing there but black smoke, which obscures his hands somewhat. In the other hand, he holds his gold mask.
Mood: Sinister and tragic

It answers the eternal question asking what's under those gold masks, and it isn't pretty.