ccording to the events of the Invasion novel, the dark lord Yawgmoth prepared for millenia to invade Dominaria, the world of his birth.

If you were going to flood your home plane with a seemingly unending army of metallic horrors and sophisticated war machines, destroy every living thing you could find, and rip the plane down to its component elements only to rebuild it in your own image, how would you do it?

Would you drive your minions to Dominaria in, say, a station wagon? No. You would not.

You'd order up thousands of these:

It's a Phyrexian portal ship, designed to make the journey from plane to invasion-worthy plane while maintaining the maneuverability of an airship. 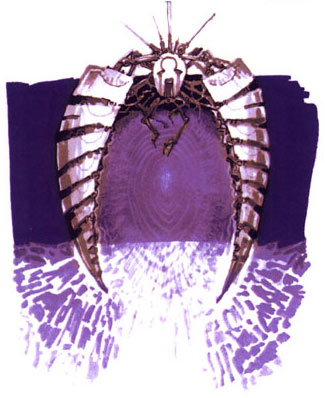 These ships were key in Yawgmoth's plan to invade Dominaria. You can see them in the background of some Invasion card art, such as Disrupt and Distorting Wake.

You'll note that, in both images, the mission of the portal ships is being thwarted by heroes (Urza and Teferi in Disrupt, and the crew of the Weatherlight in Distorting Wake).