Journey into Nyx Game Day and Challenge Deck (with Multiplayer)

Your Hero's Path has led you here. The Planeswalker Xenagos has boldly claimed a place in the Pantheon of Theros. Heliod demands a champion to strike down the insolent deity. Are you powerful enough to defeat a god and his throngs of fervent worshippers? Take up your hero's blade and meet your ultimate destiny!

ame Day for Journey into Nyx happens this weekend! In addition to a day-long Standard tournament, stores will also be running the ninth and final quest in the Hero's Path: the Defeat a God Challenge Deck.

Whether or not you plan to participate in the tournament (you totally should!), bring a sixty-card deck with you to the store, so you can face Xenagos! To wit:

Defeat a God is the ninth quest in the Hero's Path, which occurs this weekend, May 24–25, at the Journey into Nyx Game Day. 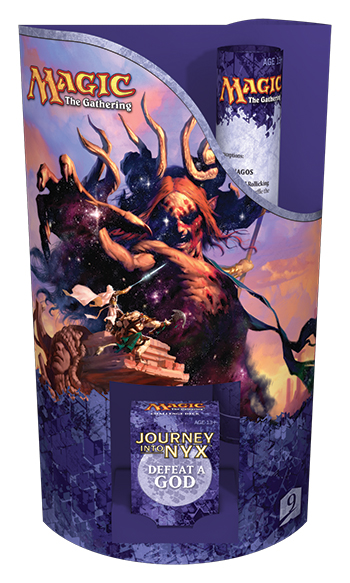 Once you finish your quest, your tournament organizer will provide you with your Game Day Hero Card, The Champion: 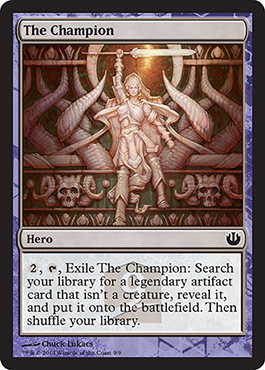 Dave Guskin answered many questions you might have about Challenge Decks in general and Defeat a God specifically, both of which are in the overall Hero's Path FAQ.

Elspeth has Ajani, and you have your friends! Xenagos is a tough challenge, so feel free to bring your friends along to defeat him. Here are the multiplayer rules for the Defeat a God challenge, as provided by its developer, Sam Stoddard:

Multiplayer rules: Follow the rules as printed on the playmat for Xenagos's deck. All players facing Xenagos and his revelers have a shared life total of 20 life. For each additional player in the game, the Xenagos deck starts with one additional Rollicking Throng on the battlefield.

We know some players will want to bring home their own Challenge Deck in order to battle Xenagos at home. Fortunately, you can! Stores will have Challenge Decks for sale starting with the Game Day event this weekend. Talk to your store about purchasing your own Defeat a God Challenge Deck!

Good luck this weekend, and have fun!