From the Library of Leng: Serra Angel

t's time for another installment of From the Library of Leng! This was a series of articles in Duelist Magazine which explored Magic cards from three perspectives at once: flavor, play, and art. The twist was that each perspective was written by a different person, and the art was described by the artist who drew the piece. Remember, this was all written in 1996, so details of the Magic storyline may have changed. And deckbuilding standards definitely have.

Now, from Duelist No. 14 in December 1996, the Library of Leng presents Serra Angel.

THE TEMPLE OF SERRA

In Dominaria, when people hear the name "Darien's Roost," they usually don't think of the small mountain town built during the peacemaking between Kjeldor and Balduvia; rather, they recognize it as Epityr, where the temple of Serra with the most compelling history resides. But the small town's original claim to fame was as the first Kjeldoran outpost allowed to be constructed in the Karplusan Mountains—an ideal trading location for both Kjeldor and Balduvia.

Over the span of three centuries, Darien's Roost grew into the prosperous town of Epityr, a place allied solely to the descendants of Kjeldor. Eventually, however, the powerful Sheoltun Empire saw the strategic advantage of controlling Epityr and sent emissaries demanding that the town surrender to their expansionist nation. The people of Epityr agreed under duress and were forced to model their culture after the Sheoltun way of life.

Finally, after forty years of oppression, the song wizard Thabit of Almaaz was able to organize a successful rebellion against the Sheoltuns—a rebellion that ended with a miracle. Thabit's magical songs brought forth the Serra angels, whose wings blotted out the sun during an entire day of fighting and whose courage and skill in battle helped liberate Epityr that day.

The uprising in Epityr signaled the end of Sheoltun's occupation of eastern Terisiare. The empire had overreached itself; and it collapsed within a few hundred years. From its ashes a new empire has grown, equally militaristic and bent on expansion. Today we know it as Benalia.

Now the temple of Serra is a landmark of Epityr, known for its awesome beauty Built at the base of a huge sculpture of Serra carved into the mountain face, the structure accommodates dozens of priests and priestesses and is visited by thousands of worshipers each year. It is one of the most active worship sites to Serra in all of Dominaria, and it is widely believed that if Epityr is ever truly threatened, Serra herself will appear with all her angels and defeat the enemies of those under her care.

"Faster, Pussycat! Kill! Kill!" is a deck designed to annoy your opponent. It's basically a banding, white weenie deck with Serra Angels that also uses land destruction and recycling to hold out long after normal decks give up. It should even last quite a long time against tournament decks. 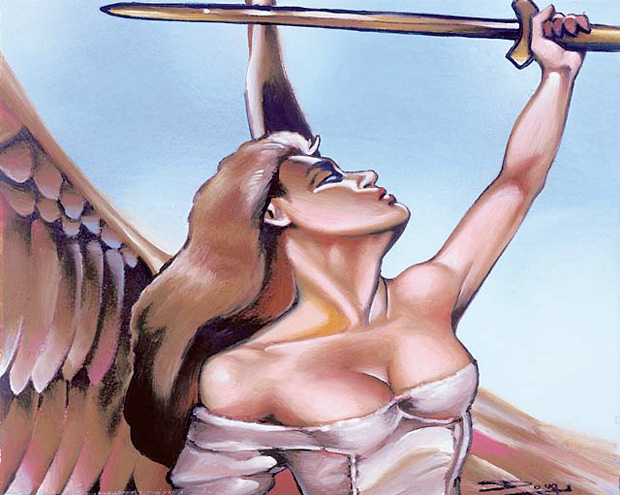 I've always been interested in depicting the powers of heaven and hell, so it was only natural that I chose the Serra Angel to paint. Whereas demons are usually depicted as huge and grotesque, angels are seen as serene, beautiful creations, commanding respect without ever having to demonstrate their ability

When I painted the Serra Angel, I chose to explore the specific dichotomy of power and grace all rolled into one. She assumes a feminine form: powerful and willing to prove it through her sword ofjustice, but graceflil enough that she doesn't need to wear armor. I also enjoy painting clothing that has a sense of asymmetry, so I gave her only one sleeve.

There's a rumor that when the Serra Angel was created, she was supposed to be "serrated" and therefore covered with sharp blades. When I was assigned the illustration, she was only called "Angel"; the "Serra" part of her name didn't get added until later.