Look out! A fish!

at Magic Arcana, we have a lot of different missions. Sometimes we want to show you a preview of an upcoming product. Other times, we're giving you a deeper look at the world of Magic. There are even times when we announce a contest.

Today, though, things are simpler. There are times when you just want to look at a kithkin getting hit by a brick tied to a fish.

Here's the direction the artist was given:

Action: Show a closeup of a kithkin's face at the moment he's hit hard in the back of the head by a stinky fish tied to a brick or rock (thrown by an out-of-frame boggart). The kithkin's eyes are just starting to flutter -- he's going to get knocked unconscious.

And here, for no reason other than the amusement of the Magic Arcana staff, is a close-up of the fish: 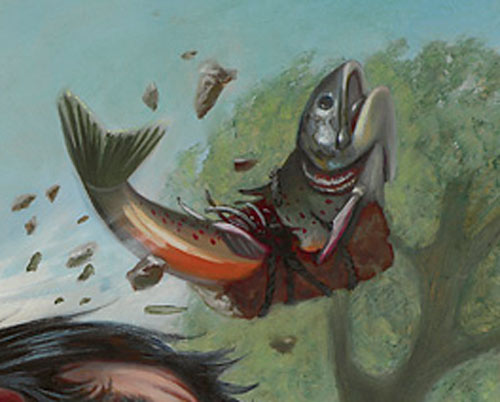